Burchell in the fast lane again 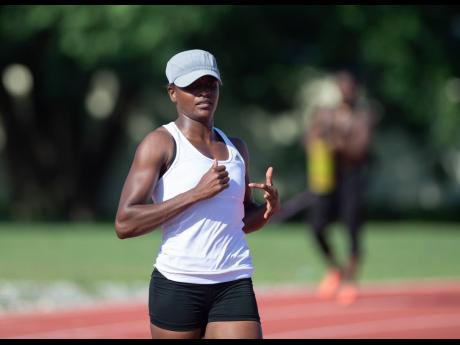 On consecutive Saturdays, Remona Burchell has nipped at the heels of two of the world’s fastest athletes. Burchell’s steely determination and the coaching advice of Maurice Wilson are driving her, she hopes, to a shot at the Eugene World Championships in July.

On January 29 at the Queens/Grace Jackson meet, she harried the magnificent Elaine Thompson Herah over 60 metres, clocking 7.29 seconds to Thompson Herah’s time of 7.19. At the February 8 Fuller/Anderson Development meet at the G. C. Foster College of Physical Education and Sport, she was even closer to the winner, Olympic 100 metres bronze medallist Shericka Jackson, 7.33 to 7.32 seconds.

Both races were tune-ups for local athletes aiming for the World Indoor Championships in March. Burchell, however, has her target posted at Eugene, host city of the outdoor World Championships in July. Mindful of a horrid bout of leg injuries since her senior year at the University of Alabama, the 30 year-old projected, “the goal is to stay healthy. Staying healthy is my main goal because, as you said, injury after injury ... so that’s my main goal and to make the finals at the World Championship trials and to make the team, the top three. So that’s my goal for the season.”

That would be a step up from her fifth-place finish at the National Championships last year, when Shelly-Ann Fraser Pryce, Jackson, Thompson Herah and Briana Williams were ahead of her.

At Alabama, the former Cambridge High and Herbert Morrison High School student-athlete won three NCAA titles, two over 60 metres and one outdoors in the 100. Last year, her first at Sprintec, she was part of the squad that won 4x100m gold at the Olympics in Tokyo, Japan.

After relocating to Jamaica and Wilson’s Sprintec Track Club, the 2018 World Indoor 60-metres finalist has been diligent. “I have been training really hard, making sure I’m mentally strong, physically strong.So I’ve just been having a mind-over-matter attitude to get it done,” said the woman who has run 11.03 for the 100m.

Strong headwinds disguise how fit Burchell is now. In fact, when converted to replicate still conditions, her efforts are equal to times of 7.16 at the Queens meet and 7.12 last Saturday. In addition, she clocked 7.18 seconds in the Fuller/Anderson heats. That is within sight of her indoor personal best of 7.08 from 2015.

“I’m extremely happy with her progress,” Wilson said. “I’m just hoping that she can stay injury-free, because she has worked really hard,” the Sprintec founder added.

Looking ahead, Wilson commented: “I’m just hoping that we can replicate what she would have done indoors in her earlier years, and translate that outdoors.”

Burchell started to realise her athletic potential when she went to Butler Community College in 2012. “When I got to college, that’s when I knew how good I was. So, from then, I took it more seriously,” recalled the woman who is all business in 2022.