Edwin Allen captain ready to step out of comfort zone 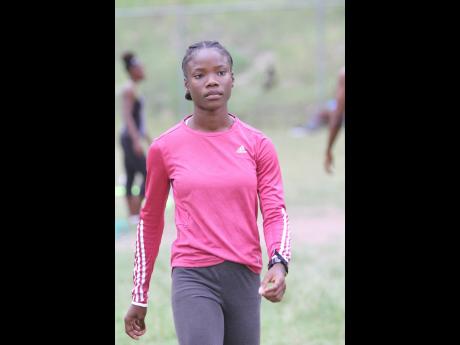 AS UNEXPECTED as it was for Edwin Allen’s Leanna Lewis to be named girls’ team captain, the sprint and middle-distance runner says she is ready for the challenge this year’s ISSA/GraceKennedy Boys and Girls’ Championship will bring.

Edwin Allen are setting up for a seventh title in a row and a ninth overall, after retaining their crown last year by 30.5 points over St Jago High.

The role of captain was given to the normally reserved Lewis, who will be leading the team for the first time. However, she says that it is a role she has accepted and hopes with it will come personal growth.

“It was a bit surprising knowing that I am not an outspoken person. I’m more of a quiet person. But this is a good example because it takes me out of my comfort zone. You have to have the courage, the bravery and keep your head focused and just push forward,” Lewis told The Gleaner.

With another strong team expected this year, Lewis says that she does not underestimate the additional responsibilities that she has in motivating the team to continue setting the standard in high-school athletics in Jamaica.

“I really think that, going into the championships, being the captain of a championship team, takes a lot of drive and determination knowing that you have to be the one that is there that will have to give the level of motivation and to be the role model as well,” Lewis said.

Lewis, a 400m and 800m runner, is also expected to compete in the sprint medley races and is pleased with the team’s preparations, despite setbacks early in the season.

“We had most people getting injuries or some mishaps. Nothing is perfect. But it is going well so far. We just have to put that in the past and focus on what is,” Lewis said.

While her leadership duties have resulted in her being challenged differently from previous years, Lewis says that the long-term benefits include the shaping of her character. She is hoping that her first year as captain will be memorable.

“I think it’s a challenge to step up but, at the end of the day, it is going to better me as a person. You have to be confident and you have to have faith. Faith is the one that drives it and the patience,” Lewis said.

“We are champions and I think that we know what to do. And you should expect us to do what we have to do.”