Getting to the semi-final a victory – Matthews 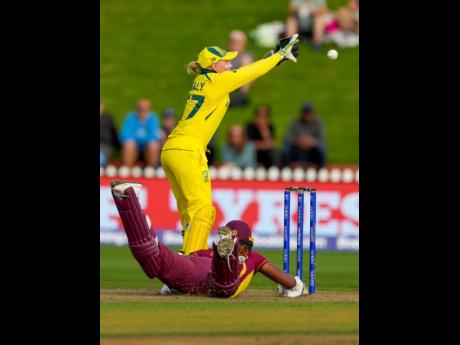 DESPITE FAILING to advance to the final of the 2022 ICC Women’s World Cup, West Indies Women captain Stafanie Taylor believes her side exceeded expectations while star all-rounder Hayley Matthews said the Caribbean women demonstrated fight and heart against some of the top-rated teams.

Speaking after Australia thrashed them by 157 runs in their semi-final clash at the Basin Reserve on Tuesday, Taylor pointed out that the West Indies were earlier able to beat New Zealand in the World Cup opener, and England thereafter, and get further in the competition than some expected.

West Indies had secured the fourth semi-final spot in the World Cup after South Africa defeated India in the final group game.

With veteran spinner Afy Fletcher ruled out of Tuesday’s match after testing positive for COVID-19, the Caribbean side went into the game as underdogs facing the tournament favourites.

Taylor top-scored with 48 from 75 balls while Matthews and Deandra Dottin both made 34, but no other batter reached double figures in the contest with the six-time champions.

Matthews, who tops the West Indies’ batting and bowling stats, said reaching the semi-final stage was itself a victory, personally and as a member of the team.

“Obviously, we would like to go further, but I think looking back on this team’s journey, playing a series against South Africa last year ... even in terms of individual growth, we’ve seen so many of our players taking steps and becoming better players, becoming more consistent. And there’s just so many positives that we can take out of this tournament for us, which is really heartening to see,” the right-arm spinner said, pointing to the victories over New Zealand and England as among the team’s accomplishments.

“These are things that we couldn’t imagine doing a year ago … . When you speak about the advantages that some of the other teams would have over us like Australia or England, with their domestic structure and the amount of talent that they have to pull from within their pools, and then you look at us competing against teams like that, it just shows the fight and the heart that we really do have as a team.”

Matthews added that, if the team continued on the current trajectory, “it’s only bigger things for us”.

However, she suggested there is a need for more competition at the domestic level to identify and groom future West Indies players.

The right-handed batsman, therefore, welcomed the first-time inclusion of a women’s competition alongside the men’s Caribbean Premier League (CPL) later this year, saying it is a good initiative for women’s cricket.

“I think things like those are only going to help with our growth ... . I reckon the more cricket we can play at a lower level to the domestic stuff, which is why CPL is going to be so big for us, hopefully we can get some more young girls coming through the system,” she said.

Noting that this World Cup may have been the last for some in the current squad, Matthews added: “It would be really good if we could start to, I guess, nurture some younger players throughout the domestic cricket season and get some more people filtering into the West Indies.”