Speedy Atomica too much for Thornbird Stakes field 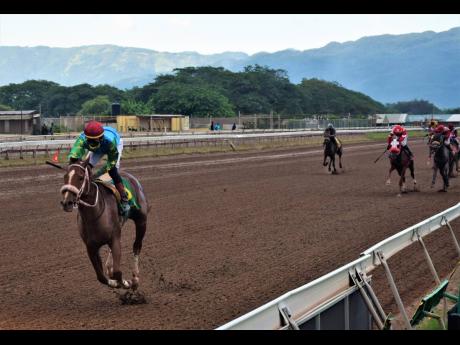 Anthony Minott
FURTHER AND BEYOND ridden by Linton Steadman wins the eight race over 7 1/2 furlongs at Caymanas Park last year.

ATOMICA, THE speedy, unbeaten half-sister to Bonnie Blue Flag and Royal Dad Trophy Grade 3 winner, Southern Cruise (Weekend Cruise), has looked awesome in the mornings and should use her pace to land Saturday’s Thornbird Stakes at seven furlongs.

Though facing smart runners such as pacey Hot Line Stakes winner, PRNCSSHOOTINGSTAR, along with the pair of OUTBIDDER and Jamaica Two-Year-Old Stakes champion, GOLDEN WATTLE, ATOMICA ought to be followed until the distance says otherwise.

Running with 119lb, getting seven pounds from not-too-quick GOLDEN WATTLE, ATOMICA’s ability to track speed and explode makes her hard to oppose at seven furlongs.

GOLDEN WATTLE shocked colts and geldings at a mile to be crowned champion two-year-old, outstaying PERFECT BREW and BRINKS, who, coincidentally, both flopped on return as three-year-olds this season.

Though GOLDEN WATTLE appears to be a staying sort, who shouldn’t be judged by PERFECT BREW and BRINKS’ Waterloo, her catching ATOMICA at seven furlongs, lugging topweight 126lb, not to mention being bottled-in at post-position one, puts her in a spot of bother.

Surrounded by speedsters from the get-go, GOLDEN WATTLE’s kick could be too late, or her being used-up early with the possibility of her having to come off her bridle in chase of cruising quicksters.

OUTBIDDER, the sale-topping, half-sister to Horse of the Year, FURTHER AND BEYOND, and classic-winning ABOVE AND BEYOND, won impressively at seven furlongs in February, ticking off her second win from three starts.

Chasing stablemate LUKSOL, OUTBIDDER easily went by off the home turn to run out an easy winner in 1:28.3. Her previous victory was January 16 at six furlongs, clocking 1:13.3, a day after ATOMICA won easily at the trip in 1:13.0, beating LUKSOL by five lengths.

ATOMICA appears to have raw speed, which can be rated, making her a dangerous tracker, who will get first run on the leaders. She showed her class at exercise last Sunday morning, clocking 1:07.0 for five and a half furlongs, out the mile chute, quite unlike Gary Subratie’s training methods, suggesting ATOMICA is simply on top of her game.

Meanwhile, Horse-of-the-Year FURTHER AND BEYOND makes his seasonal debut down in class, open allowance, in the Saint Cecelia Cup after closing out last year by landing the $4 million Ian Levy Cup, beating CALCULUS by six widening lengths.

Thanks to conditions which render his first open-allowance victory, beating CALCULUS and BILLY WHIZZ in the Jamaica Cup, null and void by date, FURTHER AND BEYOND, who skipped a level to win the Grade 1 Ian Levy, is back among a weaker field than the Jamaica Cup.

Who would have thought that the Horse of the Year would have debuted down in class when he really belongs among the likes of CALCULUS, ONEOFAKIND and friends at the highest level?