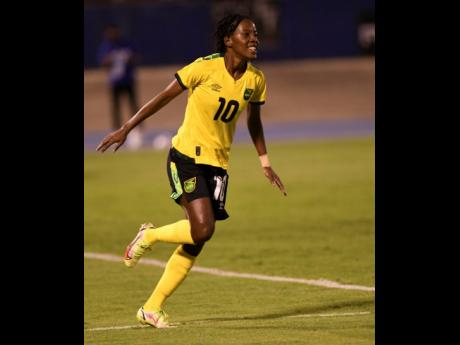 NATIONAL SENIOR women’s team attacker Jody Brown wants the Reggae Girlz to remain focused and to put away their chances.

Brown believes that is what needs to happen if the Reggae Girlz are to secure top spot in Group C of the Concacaf Women’s Championship qualifiers and a place in the competition proper in Mexico in July.

The Reggae Girlz are second in the group, with the Dominican Republic leading on goal difference.

However, the Jamaicans are hoping to overhaul the three-goal deficit when they face Cayman Islands on Saturday before going into the final game against the Dominican Republic at Sabina Park next Tuesday.

Brown believes that for that to happen, the team needs to be more clinical than they were in the first two games against Bermuda and Grenada despite scoring 10 goals.

“We just have to go out and get the result that we want. Our focus needs to really be on point, and we’ve got to score goals, that’s the main thing. I think we will need to put our best foot forward and score as many goals as we can,” she said.

The 19-year-old, who turns 20 next Saturday, has netted three of her 10 senior national team goals in the qualifiers.

She is the second leading scorer behind Khadija Shaw, who has four, and she knows a lot of the goal-scoring responsibilities will rest on her young shoulders.

“I will do all I can to help the team and get the result we need. We just got to go out and compete and get the three points,” she said.

She added that the team would be keeping an eye on the Dominican Republic versus Bermuda game on Friday and that getting the right result against Cayman, a day later will be the crucial.

“Yes, it will be a boost going into the next game. The players know the situation and we are focused and ready,” she said.

Only the top team from each group will advance to the Concacaf Women’s Championship.