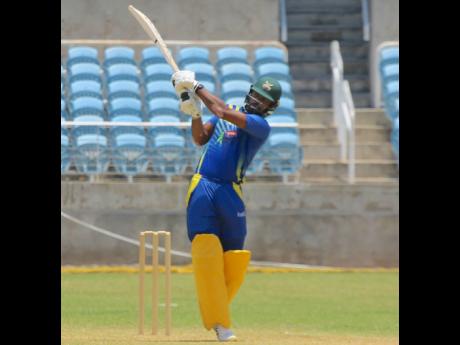 JAMAICA AND West Indies batsman John Campbell hit a brilliant half-century to lead the Middlesex United Stars to their second win in their sixth match of the Dream XI Jamaica T10 at Sabina Park, following an eight-wicket win over the Surrey Royals.

The left-hander blasted a quickfire 67 from just 20 balls with five fours and seven sixes as the United Stars chased down the 106 runs needed to win to reach 108 for two in 8.5 overs.

Needing to score at just over 10 runs per over, skipper Campbell came out all guns blazing and took 14 runs off the first over, 19 off the second, 15 off the third, and 17 runs off the fourth over.

The St Mary native would eventually fall in the fifth over when he was caught by Jamie Hay off Ryan Francis.

Anthony Walters 18 not out and Shaquille Greenwood 17 not out, would see the Stars over the line to secure their second win of the competition and fifth place in the standings on six points.

Earlier, Peat Salmon hit a blistering unbeaten 31 from eight balls with two fours and three sixes in the Surrey Royals innings, which closed at 105 for three. Javelle Glenn chipped in with 26 and Nkrumah Bonner 23. Ojay Shields bagged two for nine.

The loss sees the Royals remain in the third position with nine points from their six games.

For Campbell, the knock was a well-needed momentum booster for the team going forward, with a couple of matches still to play.

“We know that the pressure would have been on them because we only had one win. We still have a few games left, so if we win our remaining games, then anything can happen, and that is the mindset going forward,” said Campbell.

Meanwhile, in the opening game of the doubleheader, the Cornwall Warriors chalked up their third win, following a six-wicket win over the Surrey Risers.

The Risers managed to get to 87 for three in their allotted 10 overs, with Sadique Henry top-scoring with 28 and Dennis Bulli getting 21.

The Cornwall Warriors were then led to victory at 88 for four in 9.5 overs thanks largely to a swift 37 from 20 balls from Derval Green, who hit four sixes. Paul Palmer chipped in with 28.

The win for the Warriors sees them occupying second place in the standings with nine points, while the Risers are still rooted at the foot of the table on six points.