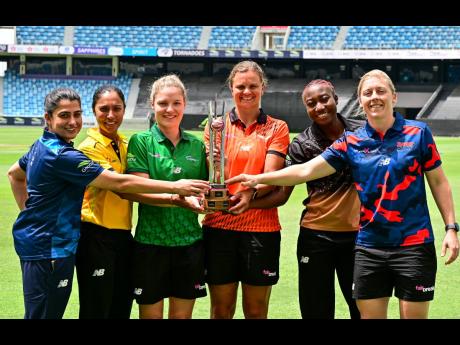 Contributed
Jamaica’s Stafanie Taylor (second from right) poses with the other FairBreak T20 Trophy captains ahead of the start of the tournament. From left: Sana Mir (South Coast Sapphires), Sindhu Sriharsha (The Warriors), Nichola Carey (The Spirit), Suzie Bates (The Falcons), Taylor (The Tornadoes) and Heather Knith (The Barmy Army).

Jamaica and West Indies captain Stafanie Taylor will be among six West Indians who will be taking part in the inaugural edition of the FairBreak Invitational Women’s T20, scheduled for May 4-15 in Dubai. The tournament, which is sanctioned by the International Cricket Council (ICC), is being held in collaboration with Cricket Hong Kong and will feature 90 players from 36 countries featuring in 19 games.

The competition will include six teams: the South Coast Sapphires, the Barmy Army Team, the Tornadoes, the Warriors, Team Spirit, and the Falcons.

While Taylor will lead the Tornadoes, Deandra Dottin, and Shemaine Campbelle will turn out for the Barmy Army Team. Hayley Matthews and Shamilia Connell will feature for the Warriors, while Britney Cooper will represent the Falcons.

Following the opening ceremony on Wednesday, Trinidadian Cooper and the Falcons will bowl off the tournament against Hayley Matthews and Shamilia Connell and the Warriors franchise.

In the meantime, Taylor, who will lead her team, the Tornadoes, against Sana Mair’s Sapphires on Thursday, says she is looking forward to some enterprising cricket as the ladies get back to match action following the ICC Women’s World Cup.

“The World Cup was a bit more intense, and now we get a chance here to be more relaxed. It’s not just about us as top players, but it is also about getting other players involved, and that’s exciting,” said Taylor.

In addition to the 40 players of ICC full members who will be taking part in the tournament, 50 players from ICC associate member countries will also get a chance to play alongside some of the more established cricketers. The players from associate member countries who will play for Taylor’s Tornadoes are Sita Rana Magar from Nepal, Maryam Bibi of Hong Kong and Sterre Kalis from the Netherlands.

Several inexperienced players will be in in her team, but Taylor is still expecting a good showing.

“My team is quite interesting, having different players from all over the world. It’s a good bunch and they are full of vibes, and we are looking forward to a great tournament,” she said.