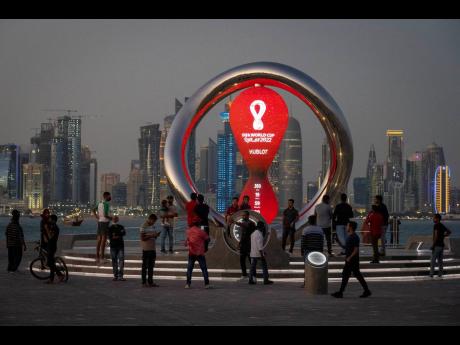 AP
People gather around the official countdown clock showing the remaining time until the kick-off of World Cup 2022 in Doha, Qatar..

FIFA has received three million ticket requests for the World Cup final in Qatar and high demand to attend some of its biggest group-stage games, even as issues linger about the tiny Persian Gulf nation’s ability to accommodate fans.

The data revealed to The Associated Press by FIFA shows there have been 2.5 million ticket requests to see Argentina play Mexico on November 26 at the 80,000-capacity Lusail Stadium, and 1.4 million fans hope to see England face the United States (US) on the previous day at the 60,000-capacity Al Bayt Stadium.

Overall, for the November 21-December 18 tournament, there have been more than two-million ticket requests from the US, England and Qatar after the second phase of sales. A random draw will be used to allocate tickets for matches where the demand exceeds capacity.

The significant number of ticket requests could reflect the desire to watch more than one match a day, with fans looking to fill time between watching their own country by attending other games, in a country where all stadiums are within a hour’s travel by public transport from the heart of Doha.

With all stadiums built around the capital, the tournament lacks the variety of tourist attractions, compared to recent World Cups in Brazil and Russia. More than 23 million ticket requests have been received overall by FIFA.

Accommodating visitors is also challenging, given how small the country is, with most hotels built around Doha. Hotel aggregation websites show no capacity on the open market for the nights of November 25 and 26 around the Argentina-Mexico and England-US games. There was also no availability showing on the official World Cup accommodation website in hotels, apartments, villas, or on the cruise ships docking in Qatar for the tournament.

There is also no apparent availability to stay in Doha on the night of the December 18 final at Lusail, the stadium which is yet to stage a test-event match.

There have been three million ticket requests for the final, despite prices rising up to 46 per cent from the cost for international fans to attend the 2018 final, won by France in Moscow, with the most expensive tickets at 5,850 Qatari riyals (US$1,607).