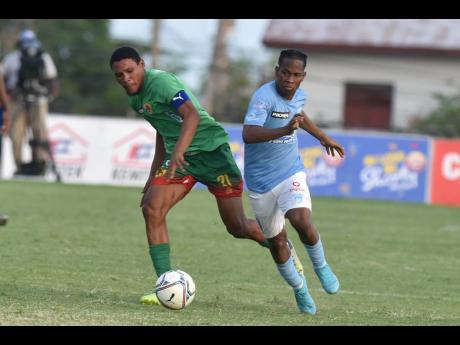 Fortune favoured Waterhouse as their two-year wait for a win against Humble Lion finally ended yesterday. And their reward is a return to the top of the Jamaica Premier League table after a month-long chase.

A Denardo Thomas strike in the 52nd minute was enough for Waterhouse to secure a 1-0 win in their game at the Stadium East field.

The win was Waterhouse’s first over the Clarendon-based club since February 17, 2020 and vaulted them to the top of the standings for the first time since March. While both Waterhouse and Dunbeholden are on 39 points, Waterhouse’s plus 22 goal difference puts them ahead.

It was a win that Waterhouse assistant coach Daniel Bent said was hard fought given the limited space they had to work with thanks to the opposition.

“Humble Lion didn’t make it easy for us. The first 15 to 20 minutes they stayed behind the ball, closed the spaces that normally would have been open to us,“ Bent said.

While admitting the bit of fortune that went his team’s way for their goal, a cross that found its way into the net, Bent said that result was critical as they turn their attention to the Caribbean Club Championship.

“The quality of Waterhouse is next to none. It came down to the sheer brilliance or luck as it were (of Thomas) but we are pleased with the result,“ Bent said.

Coming into the game Humble Lion were unbeaten in their last four games which included back-to-back wins over defending champions Cavalier and Portmore United.

While the first half saw Humble Lion winning duels and creating chances, it was Waterhouse who improved in that area in the second half. They didn’t need long to take advantage of their early second-half play, with Thomas’s cross sailing over the head of Humble Lion goalkeeper Shamal Briscoe and into the back of the net.

Humble Lion head coach Andrew Price felt that their inability to be clinical in front of goal cost them as he felt Waterhouse were there for the taking.

“I think we got some good opportunities and some good looks in the first half. We made one defensive error in the entire game and it cost us,“ Price said. “So it is small margins in games as competitive as this.”

After the fortuitous opener, Waterhouse pushed for a second, coming close when Shaquiel Bradford received a deep pass and headed the ball around the goalkeeper but wide of the target. But Humble Lion reminded Waterhouse of their ability to threaten as a strike by Andre Clennon forced a save from Waterhouse goalkeeper Kemar Foster.

Foster had to be alert in the final 15 minutes as clever interplay from Humble Lion saw Clennon through on the right. His low cross into the box was pushed aside by Foster before a Humble Lion player could capitalise for the equaliser.