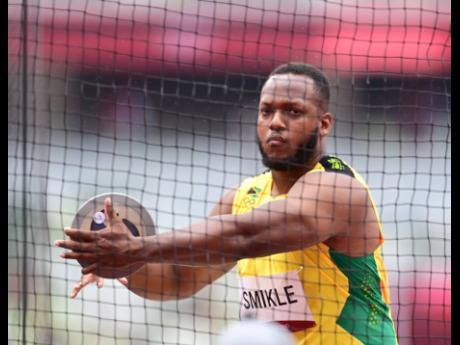 DISCUS THROWER Traves Smikle owns a World Under-18 bronze from 2009 and silver medals from the 2018 Commonwealth Games and the 2019 Pan-American Games. That might be enough for some people but Smikle is aiming for more.

To do well on the days that count the most in 2022, the smooth left-hander is building a baseline for big throws.

On Saturday, the Julian Robinson-coached thrower produced a winning throw of 66.60 metres at the JAAA/SDF Jubilee meet. The mark is the longest by a Jamaican this season, and bettered the World Championships qualifying mark of 66.00 metres.

Asked when he will return to the 67-metre range he has reached five times, he replied, “I believe, with the steady work that my coach and I are doing, we will get there.”

Then, the man with a personal best of 67.72 added, “I think it’s better to build consistency and have a baseline and try to improve as the season goes along and, when it counts, I would prefer to have my big throws in that scenario. So when will the 67 come? I want it to come when it comes.”

His patience is a sign of his trust in Robinson.

“One of my issues is finding a baseline in my technique that can help me to throw consistently over certain marks when I go to compete. So, one of the things that coach and I spoke about in the off season was that we had to find a way that works for me and that, in any given situation, I can use that way to produce good results,” he said.

Like everyone else, he struggled during the COVID-19 pandemic and, to make matters worse, he suffered a series of injuries that blighted his Olympic campaign.

“I had a difficult two years and it’s a good feeling to regain some consistency and bounce back with a qualifier finally,” he said of his win on Saturday.

“This year, I don’t want to just be a participant,” he declared.

“I want to put myself in a position to make the final and be a medal contender.”

The nation’s best World Championships result in the men’s discus came in 2019 when Fedrick Dacres finished second, and Smikle has similar objectives.

“The consistency and throwing far when it counts, it means a lot to me, more than just trying to throw far early. You know, it’s always good to get a good mark out early but, if I can build a level of consistency, if I can go to 5, 6, 7, 8, 9, 10 meets and be consistent and competitive and win, then I think I’d be in a good position by the time World Championships comes around to compete amongst the best and fight for a medal, preferably the gold,” he said.