Chelsea’s Lukaku in spotlight before FA Cup final vs Liverpool 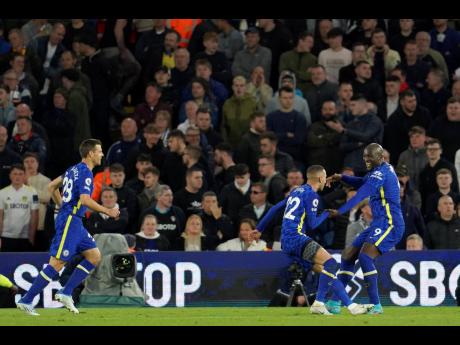 AP
Chelsea’s Romelu Lukaku (right) celebrates with teammates after scoring his side’s third goal during the English Premier League match between Leeds United and Chelsea at Elland Road in Leeds, England on Wednesday May 11, 2022.

Chelsea striker Romelu Lukaku was in damage control on the eve of their FA Cup final against Liverpool.

Lukaku moved to shut down suggestions that he’s trying to go over manager Thomas Tuchel’s head to seek talks with the club’s prospective new owner.

The Belgium striker’s agent, Federico Pastorello, was quoted in Italian media as having said he wants to sit down with prospective owner Todd Boehly, after the proposed US$3.1 billion sale of the club is complete, to discuss his client’s future.

“Never ever will I let someone speak for me,” Lukaku wrote on Instagram. “I kept my mouth shut and focused on helping the team and end the season in the best way as possible. So if someone out there trying to say something about me and the club ... Not in my name.”

Chelsea paid a club-record fee of US$135 million to bring in Lukaku from Inter Milan but his first season back with the club has been difficult. He indicated in a Sky Italia interview in late December that he was unhappy at Stamford Bridge, though he later apologised.

Lukaku has three goals in the past two games – his first back-to-back starts in months – and leads the team with 15 goals in all competitions.

Tuchel said yesterday that he’ll likely choose between Lukaku and Kai Havertz for the central role.

“Romelu played lately and he scored lately, so he did everything to stay on the pitch. It will be our final call tomorrow,” the manager said.

Tuchel said he had been made aware of the agent’s comments only moments before his press conference.

Today’s game marks the 150th anniversary of the first FA Cup final – in what is the oldest domestic cup competition in the world.

It’s also a rematch of the League Cup final at Wembley in late February, when Liverpool won 11-10 on penalties. Liverpool are still in contention for an unprecedented quadruple, and Chelsea are still smarting from their quarter-finals exit from the Champions League.

Liverpool manager Jurgen Klopp says he has “no idea” who will line up in attack for Chelsea, the FA Cup runner-up the past two years after winning in 2018.

“They have offensively incredible talent,” Klopp said. “We have no idea how Thomas will line up. There are so many different options. (Timo) Werner and Havertz didn’t start the last game. ... Very interesting to prepare (for) to be honest.”

Chelsea’s front three of Christian Pulisic, Lukaku and Mason Mount each scored in the 3-0 win over Leeds on Wednesday.

Liverpool have not won the FA Cup since 2006, and last reached the final a decade ago – losing to Chelsea 2-1.

“We are really, really desperate to win it,” Klopp said. “It would mean the world to us.”

The Reds are in second place in the English Premier League, behind Manchester City, and will face Real Madrid in the Champions League final in Paris on May 28.

Liverpool midfielder Fabinho sustained a minor hamstring injury midweek and is not expected to play against Chelsea, but Klopp confirmed yesterday that the Brazil midfielder will “definitely” be ready to play against Real Madrid, and possibly sooner.

For Chelsea, Mateo Kovacic and N’Golo Kante could both be ready to play today.