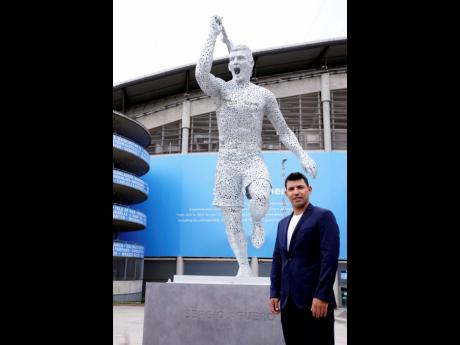 AP
Manchester City Club legend, Argentinian Sergio Aguero, attends the unveiling of his statue outside the Etihad Stadium yesterday, to commemorate the tenth anniversary of the Club’s first Premier League title and the iconic ‘93:20’ moment in Manchester, England.

The Argentine was back at the Etihad Stadium yesterday as City honoured their record goalscorer with a statue that depicts the moment when Aguero ripped his shirt off in celebration after scoring against Queens Park Rangers on the final day of the 2011-12 season.

“Truthfully, it is a very beautiful thing for me, to see myself 10 years ago is very moving,” Aguero said. “In those 10 years, I was able to win a lot of trophies and was able to help the club become one of the most important in the world ... . It is something very special.”

City won five league titles with Aguero and are on the verge of another one. Aguero scored a club-record 260 goals for City and was a key player in the growth of the team as a major football force. Before 2012, City had not won England’s top tier since 1968.

The 33-year-old Aguero switched to Barcelona last off season but retired in December because of a heart problem.

It was sculpted by Philadelphia-based Scottish artist Andy Scott.