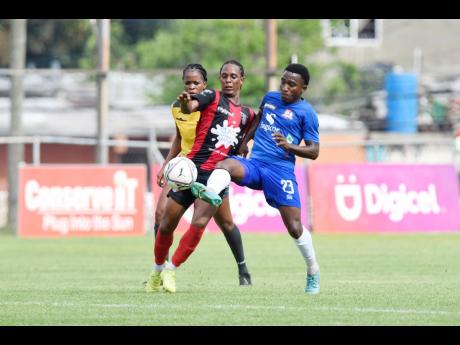 Arnett Gardens went into the break with the advantage but lost Ajuma Johnson after 23 minutes to a straight red card.

Then after the break, Earl Simpson picked up his second caution in the 67th minute.

Arnett Gardens coach, Paul Davis, said it was a tough task getting a result from the game but noted that it was the second time this season that they had played short and come up trumps.

“To see them come out and fight in this manner is really pleasing. And to do it after going down to ten, and then nine players, it is a great performance.

“We have players who can play multiple positions, and they understand the system I want to play. Dunbeholden have good ball players, so if you rush them, they will open you up. So we allowed them to play the long ball which was easier for us to deal with,” Davis disclosed.

The game had hardly got going when Guthrie beat Damion Hyatt for the opening goal.

Ronaldo Cephas could have added a second but headed over the bar in the 17th minute. Moments later, Johnson was red-carded after a rash challenge on an opponent.

However, before the break, Dunbeholden’s Atapharoy Bygrave missed two great chances to equalise. He first mishit a shot then failed to make contact with a pass from three metres.

After the break, Bygrave had three great chances for Dunbeholden while Kimoni Bailey was also guilty of failing to convert a chance from three metres.

At the other end, Arnett Gardens’ Kimani Arbouine came close but was denied by goalkeeper Damion Hyatt of Dunbeholden.

Dunbeholden coach Ricardo Smith said his strikers were not at their best.

“It wasn’t what we wanted. We tried to push more persons in attack, but we didn’t get the goal. Both forwards were in good positions and got the chances, but they just did not finish today. They are always finishing for us, so today was probably an off day. They (forwards) looked a little bit rusty and a little bit slow,” he said.

The second game at the Anthony Spaulding Sports Complex, Harbour View versus Humble Lion, ended in a 0-0 draw.