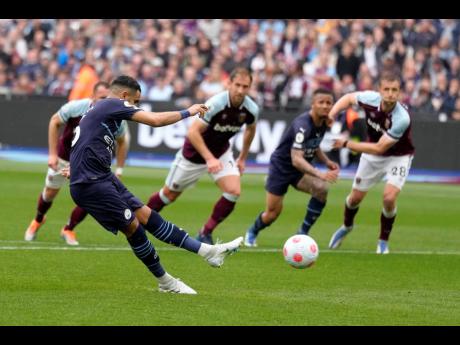 Another Premier League trophy was virtually in Manchester City’s hands. All it needed was Riyad Mahrez to convert a penalty, like he had done in each of his previous seven attempts from the spot this season.

There is still plenty of life in this absorbing title race after Mahrez had a penalty saved in the 86th minute, leaving City to settle for a 2-2 draw at West Ham and a four-point lead over Liverpool heading into the final week of the season.

Liverpool head to Southampton for their game in hand tomorrow needing at least a point to take the title race to Sunday – the last day of the season. A win is probably required, though, given that City has a superior goal difference of seven compared to Liverpool.

City finish at home to Aston Villa, and that throws up an intriguing storyline. Villa is coached by Liverpool great Steven Gerrard, who was never able to win the league for Liverpool. He still could – but as a manager of another team.

Liverpool host Wolverhampton in their last game and still, somehow, retain hope of an unprecedented quadruple of major trophies, having won both domestic cups and reached the Champions League final.

“We couldn’t expect different with this Liverpool – they are almost the perfect team,” City manager Pep Guardiola said. “We didn’t expect to win the title with three, four, or five games to spare.”

It could have, basically, been over by now, however, had Mahrez put his spot kick past Fabianski.

Guardiola hardly flinched when Fabianski dived to his left and clawed away the penalty, which was at an inviting height for a goalkeeper. After a few seconds, Guardiola scratched the side of his head and rubbed his face and didn’t appear too disheartened at the final whistle as he shared an embrace with Mark Noble – West Ham’s long-serving midfielder who is retiring at the end of the season and was making his final home appearance for the club.

It is Mahrez’s first failure from the spot this season, but he has history. In the 2018-19 campaign – another City versus Liverpool title race that went to the final day – the Algeria winger smashed a penalty over the crossbar late in the game in a 0-0 draw at Anfield.

City went on to claim the title and are favourites to do so again.

“We won’t look at anyone else – we’ll just try and win our game,” Guardiola said. “I’m pretty sure the Etihad Stadium will be full and they’ll be supporting us.”

It is just as tense at the other end of the standings, though Leeds provided a twist in the relegation fight.

Leeds scored in the second minute of stoppage time through Pascal Struijk to salvage a 1-1 draw against Brighton and move out of the relegation zone at Burnley’s expense.