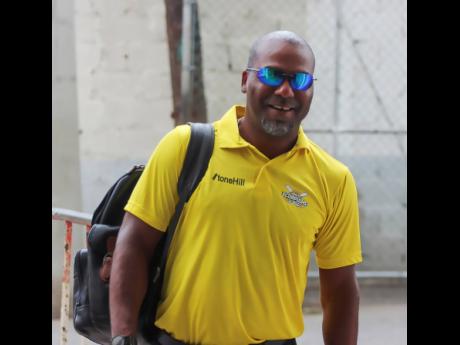 JAMAICA SCORPIONS head coach Andre Coley says his team will be entering today’s third round of the West Indies Championship four-day clash against the Windward Islands Volcanoes with clear plans.

When the first ball bowls off here at 9 a.m. at the Brian Lara Cricket Academy in Tarouba, Coley wants his team to be switched on from ball one, as they look to put in the type of performance needed to lift the Jamaican franchise from the bottom of the six-team standings.

The Barbados Pride head into Round three with a table-topping 42.0 points, with Trinidad & Tobago on 38.6 and the Leeward Islands Hurricanes rounding out the top three with 24.6. Fourth on the table are the Guyana Harpy Eagles on 21.4 points, followed by Windward Islands Volcanoes on 10.9 and Jamaica Scorpions on 8.8.

For Coley, the aim is to finish the tournament in the top half of the standings, starting with the Volcanoes clash.

“The equation is pretty simple, and that is we need to win three games to claw our way back to end up anywhere near the top three. You can’t do that without winning the first game, so we will take it one game at a time and make sure that our plans are good,” said Coley.

Coley and assistant coach Andrew Richardson will be pulling out their notes in a bid to gain any additional advantage, as both coaches had stints with the Volcanoes Franchise in recent years.

Having intimate knowledge will be key; however, newly appointed Volcanoes coach Shirley Clarke believes the players will be confident to face their former coaches.

“I think it will give the players an extra motivation to do well, seeing that they had these coaches before,” said Clarke.

For the Jamaicans, captain John Campbell along with Jermaine Blackwood, Nkrumah Bonner and Brandon King will be leading the batting charge, while the in-form Nicholson Gordon spearheads the bowling attack alongside Marquino Mindley and Jamie Merchant.

For the Windwards, captain Kavem Hodge is expected to factor with both bat and ball along with veteran Devon Smith and the West Indies U19 pair of Akeem Auguste and Teddy Bishop.

Their bowling will be centred around pacer Shermon Lewis, Preston McSween and Larry Edward.

In the meantime, Trinidad and Tobago Red Force will face off with the Leeward Islands Hurricanes at the Diego Martin Sports Complex, and Red Force captain Imran Khan is looking for home advantage to count.

“We are confident heading into round three, but we are taking it one game at a time and not taking anyone for granted. Our only focus is Red Force and executing the plans that we have as a team.”

Opposite number Rahkeem Cornwall is relishing the underdog tag; however, he is confident that his team is in T&T to put on a good showing.

“Our preparations coming into the remaining rounds have been going well and we are just ready to get out and play. Cricket is played on the day, so we must assess the conditions, stick to our game plans, and execute.”

Over at the Queens Park Oval, leaders Barbados Pride will face the Guyana Harpy Eagles, and both camps are refreshed and rejuvenated ahead of the clash.

“The guys are looking forward to the challenge after the lengthy break. For us, it’s backing our plan and sticking to it. We cannot underestimate any of the opponents and we must execute what we have been doing at training,” said Pride captain Kraigg Brathwaite.

“It’s good to see the players getting in good performances during the practice matches we had. It’s about getting our mental focus in order and performing as we know we can,” said Leon Johnson of the Harpy Eagles.