Stakeholders believe a ‘familiar’ coach necessary for race against time 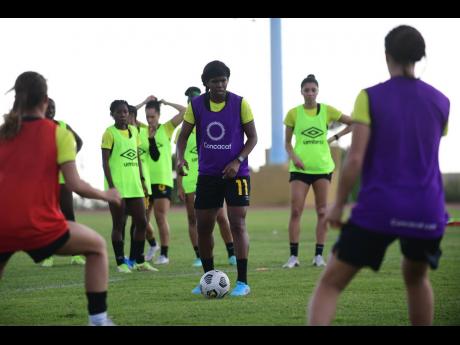 FORMER NATIONAL women’s coach, Charles Edwards, and Bradley Stewart believe that for the Reggae Girlz to be successful at the Concacaf Women’s Championship in Mexico in July, the Jamaica Football Federation (JFF) will need a coach already familiar with the national programme.

Chairman of women’s football, Elaine Walker-Brown, said the JFF is working to solve the equation as quickly as is possible.

According to the long-time football administrator, whoever gets the job would be aware of the situation and what is required.

Nevertheless, Stewart and Edwards contend that with only a month to go before the tournament, the resignation of Vin Blaine as coach, yesterday, has made qualification for the World Cup that much more difficult.

They both believe a coach with knowledge of the programme and experience in working with the Girlz will give them the best possible chance of success.

“I sympathise with Vin,” Stewart commented.

“Because persons who have no right in firing coaches came together and forced him out of a job he is absolutely qualified for.”

He continued by saying the dismissal of a coach in the middle of a campaign is never a good thing.

“It is like asking a new coach to take over at half-time and have him try to make significant improvements.

“So whatever aspirations we have in qualifying for the World Cup, we might as well throw them through the window unless you bring somebody into the system that has prior knowledge of the players and the system and the talent that exists,” he said

He also believes Lorne Donaldson or Andrew Price would be ideal candidates.

“If you will bring back these people, you have a chance off doing well. If you bring a new coach that does not know the players, the learning curve will be steep and by the time he learns enough about the players, the competition would have been finished,” he said.

“Getting a new coach who does not know the girls and does not understand them and is completely new to the federation could be a challenge based on the time we have,” he said.

Walker-Brown indicated that while a coach with prior experience with the programme would be ideal, the quality of that coach is just as important.

“We need to find someone of high quality. I have asked myself, if we can get a coach in time but once we have the finance it can happen.

“We had persons applying for the position but we could not have discussions until Vin stepped down. But we are moving very quickly because we know what is at stake come July. And it has to be sooner rather than later,” she said.