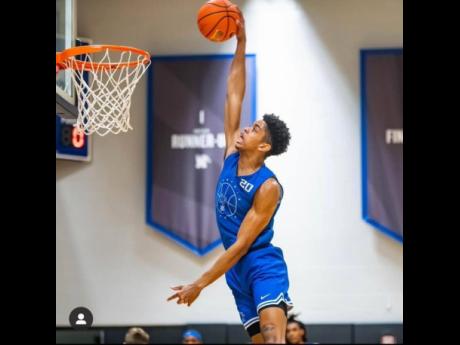 Contributed
Josh Minott takes off for a dunk.

Confident about his decision not to return to college, Jamaica international basketballer Josh Minott says he is ready to live his NBA dream, with added motivation to secure a future for himself and his family.

Minott is being evaluated at the NBA Combine in Chicago, which started Monday, as he continues his preparation for next month’s 2022 NBA Draft in Brooklyn, New York.

Minott declared for the draft in March after his freshman season at the University of Memphis where he averaged 6.6 points and 3.8 rebounds in 33 games, which included five starts. He recently participated in a pre-draft workout on Friday with the Indiana Pacers. In an interview with the IndyStar on Friday, he said he was determined to prove he belongs at the elite level and had no plans to go back to college.

“I’m not even sure if this goes against the birthday rules, but I’ve had the same birthday wish for 19 years since I could form thoughts in my head. You’re not supposed to tell people, but I feel like I wasted some (wishes), you know?” Minott said. “It’s the same thing every single year. I’ve never changed it, never wavered from it. I’ve wanted to be here, needed to be here. Now I’m just gonna show every team why I should be here.”

Minott, fittingly, revealed former Indiana Pacer Paul George was his favourite player. While born in Florida, Minott has put on the Jamaican colours at the youth level, specifically at the 2019 CentroBasketball Under-17 tournament. With an emphasis on family, Minott says that his decision to make the NBA jump now is about their long-term future

“From sophomore year (of high school), I’m like, ‘Yo, I could really feed myself, my kids and grandkids with this,’ and that’s something that I keep telling myself every day. Family is important to me, and I feel like my whole family could prosper through an opportunity like this.”

Minott was projected to be a first-round pick before the 2022 season started and he impressed with not only his skill sets, but also with his physical gifts. His dunking, in particular, has got people to take notice.

“It’s funny, I started dunking like the summer going into sophomore year (of high school), which is pretty late for a lot of people,” Minott said.

“There’s middle-schoolers dunking now, sixth-graders. But now people see me, they see the athleticism and it’s like, where did that come out of?”

The draft order will become clearer when the NBA Draft Lottery commences today.