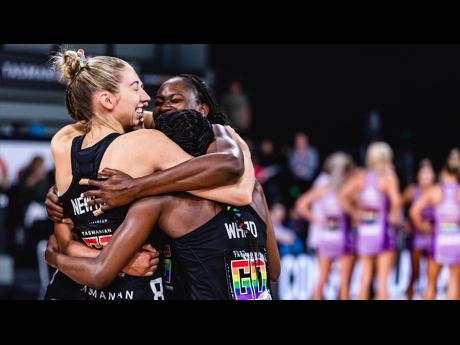 One of the most dominant shooters in the Australian Super Netball Championship this season, the 23-year-old scored 65 goals from 66 attempts, a performance which helped Magpies hold off a determined bid from Firebirds and come away with a 71-67 victory at Derwent Entertainment Centre.

Magpies raced to an 18-13 first-quarter lead which they converted into a 38-31 advantage at the half-time whistle, and even though they were outscored in the next two quarters, Nelson had already done the damage.

Donnell Wallam led the Firebirds resistance with 31 from 36 attempts and received outstanding support from Gretel Bueta, who finished with 20 from 21 attempts.

“This has been a long time coming. It’s been a huge turning point over the last three weeks,” said wing attack Kelsey Browne, who ended with 34 feeds.

“There’s been a lot of hard conversations and everyone’s starting to take responsibility for their own performance.”

Nelson was forced to share the spotlight with fellow Sunshine Girl Jhaniele Fowler, who shot a perfect 66 from 66 as West Coast Fever brushed aside Sunshine Coast Lightning 74-65 at USC Stadium in Queensland, to post their third win on the trot.

Goal attack Cara Koenen led Lightning with 27 from 28 attempts while Reilley Batcheldor chipped in with 15 from 20 attempts.

Fever trailed 18-19 after the first quarter but rebounded emphatically in the second to outscore Lightning 22-11 and take command of the contest.

Lightning produced a late onslaught to outscore Fever in the second half but came up short in the end.

“Kudos to the crowd, they pushed them a lot but we opened the gate and allowed Lightning to come in,” Fowler said.

“But that’s something we’re working on, making sure we put our foot down when we have a massive lead.”

Fever top the standings on 28 points, the same as second-placed Vixens.