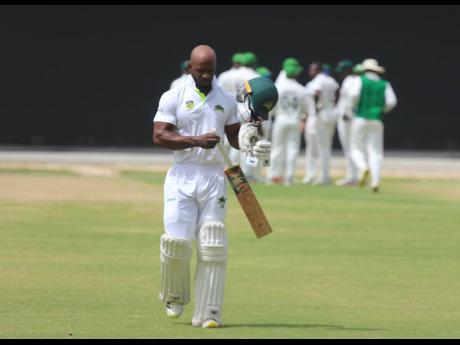 Lennox Aldred/Freelance Photographer
Windward Islands Volcanoes opener Devon Smith walks off after being bowled by Jamaica Scorpions pacer Nicholson Gordon for one during their West Indies Championship encounter at the Brian Lara Cricket Academy in Tarouba, Trinidad on Wednesday.

Jamaica Scorpions fast bowler Marquino Mindley struck three times in his second spell to restrict the Windward Islands Volcanoes to 68 for five at lunch on day one of their four-day West Indies Championship round three match against the Jamaica Scorpions at the Brian Lara Cricket Academy.

Mindley has so far removed Alick Athanaze (6), captain Kavem Hodge (23) and Akeem Auguste (3) after the Volcanoes were asked to take the first strike by Scorpions captain, John Campbell.

Pacer Nicholson Gordon also weighed in with the wickets of openers Devon Smith who was bowled for one and Kimani Melius, who went lbw for 17.

Keron Cottoy and Denis Smith are not out on seven apiece.

Over at the Queens Park Oval, The Guyana Harpy Eagles who won the toss and chose to bat against the Barbados Pride, are 68 for one at lunch with Tevin Imlack not out on 32 and Tagenarine Chanderpaul on 11. Chanderpaul Hemraj is the only wicket to fall to Raymon Reifer for 19.

At the Diego Martin Sports Complex, the Leeward Islands Hurricanes who opted to take the first strike against host Trinidad & Tobago Red Force, are 98 for two at lunch.