Walter wants to keep children off the streets 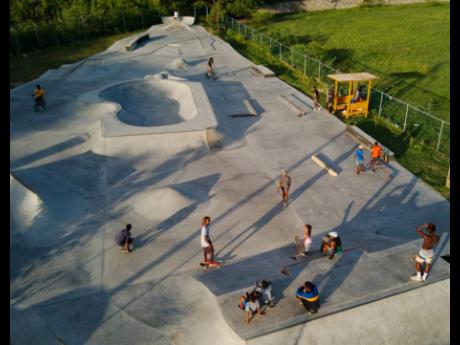 FREEDOM SKATE Park Foundation member Remy Walter says he hopes that exposure of international professional skateboarders to the local skating scene will be the catalyst for increased local presence in the sport.

The event will see American skaters Mark Suciu, Donta Hill, Curren Caples and Julian Davidson display their skills to local skateboards, who have been using the park as a means to sharpen their skills as well as a refuge from criminal activity

Walters says he hopes the event will not only exposure local skaters to other cultures, but also advance the sport at the grassroots level.

“This event is important to show that there is a real interest in skateboarding and also important for the children who have been skating for a year and a half (since the park opened). It is very important for those children to meet people from other cultures,” Walter told The Gleaner.

“They will show them new tricks, they will be able to interact with them and motivate them to keep on skateboarding and to get to the next level.”

That next level he is targeting is the next two Olympic cycles in 2024 and 2028 to be held in Paris and Los Angeles. Skateboarding made its Olympic games debut in Tokyo last year. Joel Ricketts created history when he became the first Jamaican to compete in skateboarding in an international competition at the 2021 Junior Pan American Games in Colombia last year.

But while one of the major goals is to see the sport’s growth in the island, Walter says that the primary objective is to ensure that young people are kept from criminal elements and that a safe space is provided for them.

“There is the social aspect which is the main goal of Freedom Skatepark, taking care of the children, keeping them off the streets. But also if we can find talent to push them, so they can travel, see the world and represent Jamaica, that is also something that we would love,” Walter said.

“Not only the Olympics, but international competitions because the Olympics is just only a small part of the skateboard world.”

Walter says that despite the challenges of the COVID-19 pandemic, he has seen an increase in the number of persons who have used the skatepark since its opening in April 2020. Walter says he hopes that it will also serve as a contribution to the sports tourism industry with surfing and now skateboarding being based in Bull Bay.

“It is good for Jamaica. I hope we will have more skateparks in the future because it is part of the tourism attraction and for (people) all over world who dream about Jamaica but never dared to come, that will be one more reason to come,” Walter said.