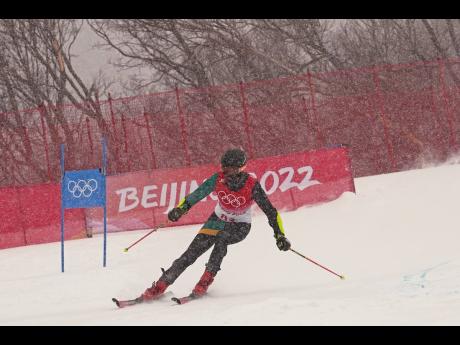 Robert F. Bukaty
Benjamin Alexander, of Jamaica passes a gate during the first run of the men’s giant slalom at the 2022 Winter Olympics, Sunday, Feb. 13, 2022, in the Yanqing district of Beijing. 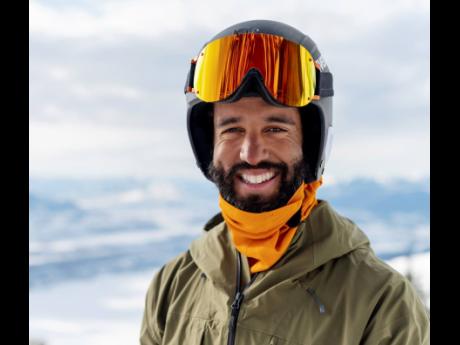 JAMAICA’S FIRST Olympic alpine skier, Benjamin Alexander, is now in the island putting plans in place to ensure that the Caribbean country has a bigger pool of athletes to represent it at the next winter games in Italy in 2026. Although Jamaica has...

JAMAICA’S FIRST Olympic alpine skier, Benjamin Alexander, is now in the island putting plans in place to ensure that the Caribbean country has a bigger pool of athletes to represent it at the next winter games in Italy in 2026.

Although Jamaica has been represented in bobsled many times, Alexander became Jamaica’s first Olympic ski representative when he defied the odds to qualify for the 2022 Beijing games at the last minute, following a gruelling four-year journey,

At the time, Alexander had said he wouldn’t be going back to the Olympics at 40 but wanted to ensure that the country did not stop its progress with him.

Now he is working on bringing through the next generation of Jamaican skiers and snowboarders, saying that if he fails to get less than five representatives at the next Olympics, he would count himself a failure.

Alexander’s first port of call is to seek the blessings from the various stakeholders for his project, and he revealed that cross country skiing is one of the events he has targeted.

He is also planning a local trial for those interested in trying the event.

While actual cross country skiing is not possible locally, he said using roller skates as an avenue to qualification was a legal option for countries that do not have snow.

PLANS FOR NEXT TRIP

He is now working hard to make those plans a reality for his next visit in a few months’ time.

“I can bring a film crew, equipment, and coach on my next trip, and I am certain that in one month, we can host a trials in the summer version of the cross country equivalent, which is the roller skates,” said Alexander.

He explained that the differences between roller skates and skis are so negligible, the International Ski Federation (ISF) accepts races conducted on roller skates as official race results, and he believes Jamaicans can qualify via this route even if they have never seen snow.

“We can train a Jamaican track athlete to Olympic standard within one month, and my plan is to also film that process.

“We will follow that up with a lot of training for the athlete so that by the time he gets to the next Olympics, he is not just at qualification standard but at top 30 in the world.

“We could host the first roller skate race under the Jamaica Ski Federation, invite people from all over the world, and it will be officially sanctioned by the International Ski Federation,” he said

So far, Alexander has had talks with Christopher Samuda, Jamaica Olympic Association (JOA) president, and is seeking audience with Minister of Culture, Gender, Entertainment and Sport, Olivia Grange and Tourism Minister Ed Bartlett.

He has also been communicating with some random groups eager to make a positive contribution.

“There is a guy interested in getting some Jamaicans for top-level competition at Olympic snowboarding.

“And if I have less than five athletes on ski or snowboards the next Winter Olympics, I would have failed in my mission to do what I want to do for Jamaica,” he said.

One of the most difficult aspects of Alexander’s task is finding an appropriate location to host the trials, and he will count on local experts for advice and direction.

“I have requested a sit-down with Jamaica Athletics Association president Garth Gayle, and once I interact with him and his team, I will have an opportunity to identify a good place.

“I would love somewhere like an unused runway or airport that has a smooth tarmac. But roller skates can work on a track, so we can use the National Stadium as there is no better place. But that is something I need to figure out before I come back,” he stated.

With five athletes already under his wings, including the United States-based Rivers triplets and a male and female cross country skier, committed to the 2026 qualification, he will continue his recruitment efforts to bolster that number.

“It is likely that we can find a female snowboarder and a speed skier along the way,” he said.