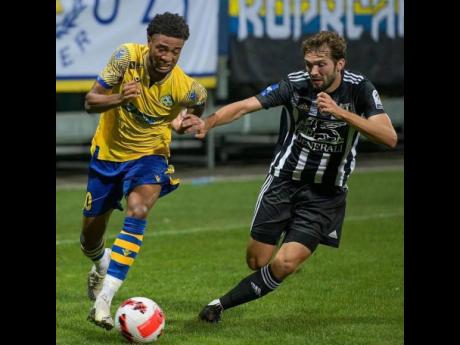 Contributed
FC Kòpers Kaheem Parris (left) gets by a defender in a Slovenia PrvaLiga game.

FC KOPER winger Kaheem Parris has earned a recall to the national team and will be one of 20 Reggae Boyz down to make a trip to Spain, where they face Catalonia.

Parris, who recently saw his team fall a point short of lifting the Slovenian national league, PrvaLiga, with Koper but won the Slovenian Football Cup, has not featured for the Reggae Boyz recently.

Parris lost his place back in January when he came down with COVID-19 and could not join the Reggae Boyz for their friendly against Peru and has not returned since.

Still, Parris has been in exquisite form this season and has scored 10 goals in 33 league games and assisting on a further three. Parris also scored two goals in the Slovenian Football Cup.

The 22-year-old will be joined in the squad by the likes of Corey Addai, a goalkeeper who plies his trade for second-division Danish outfit Esberg FB.

The squad will also see the return of Eupen’s Tyreek MaGee, who had been inexplicably missing from Jamaica’s final attempts at World Cup qualification recently.

Jamoy Topey also returns to the squad, but there is no place for his former Cavalier teammate, Kevin King.

Another interesting, even if understandable omission, is Shamar Nicholson, who, like Parris, has had a fantastic season, passing the 20-goal mark for the first time since going overseas.

Nicholson plies his trade for Russian outfit Spartak Moscow, putting his availability in question because of travel restrictions in and out of Russia.

The Reggae Boyz will play against Catalonia on May 25 in preparation for their June 4 Nations League opener against Suriname.