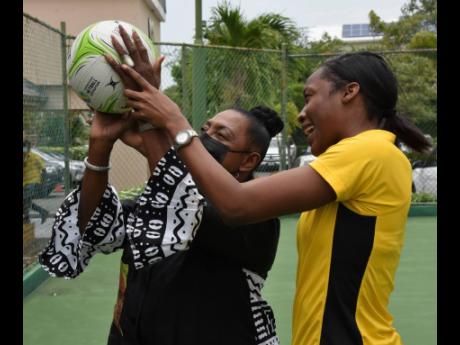 Ian Allen
Sunshine Girls goalshooter Shanice Beckford (right) gives shooting tips to Minister of Culture, Gender, Entertainment and Sports Olivia ‘Babsy’ Grange during the launch of this year’s staging of the Americas Regional Netball World Cup qualifiers which will take place in Jamaica at the National Indoor Sports Centre. The launch was held at the National Commercial Bank Wellness and Recreation Centre in St Andrew yesterday.

This year’s staging of the Americas Regional Netball World Cup (NWC) qualifiers has received a $12 million sponsorship from the Government.

Minister of Sport, Olivia Grange, the patron of the tournament, made the announcement during yesterday’s launch at the National Commercial Bank Wellness and Recreational Centre in St Andrew.

“I am happy to contribute and I am here to give them all the support that they need,” said Grange.

“It is a big deal for us to host this event and I am happy to come on board, and we will do our best to be the best hosts ever for a World Cup qualifier,” she said.

The minister added that she is very delighted that she has been chosen to be patron of the meet.

“I feel good about it and, to me, it is a honour because normally the ministers are approached to give support and not given that special recognition, and so, to me, it warms my heart,” Grange said.

The eight-team championships which will qualify two teams from the region to next year’s NWC in South Africa, will be held at the National Indoor Sports Centre, October 15-22. These two teams will join Jamaica, who have already qualified for the NWC.

Netball Jamaica (NJ) is set to receive $4.3 million from the sponsorship, which will go towards their preparations for the championships.

Tricia Robinson, president of NJ, said her organisation is very grateful for the sponsorship and the support that it has received from the Government for the event.

“I am very pleased with the minister’s contribution to us,” said Robinson.

“I presented our budget to her for our road to South Africa and we are indeed grateful that she said she will be supporting us every step of the way,” she said.

The NJ boss said that her organisation is very proud to be hosting the championships for the first time in the country’s history.

“Coming back to netball after two years of not being able to play on court, and then hosting the Netball World Cup qualifiers for the first time ever, I think we are very proud to be doing that,” Robinson said.

President of Netball Americas, Marva Bernard, said her organisation is very delighted for the support that they have received from the Government.

I am very proud and happy for the minister to be the patron and, in the true Minister Grange style, she has just really made a huge investment in a championship that is going to make her and Jamaica proud,” said Bernard.