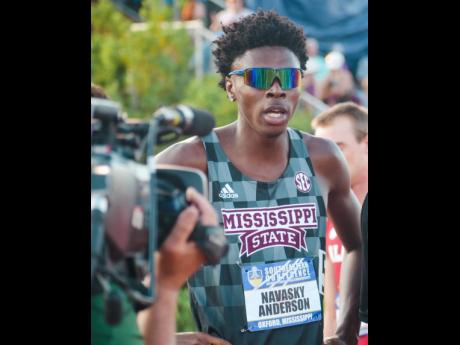 After recently clocking the fifth-fastest 800 metres time by a Jamaican, Navasky Anderson hopes to become the first Jamaican male to compete in the event at the World Athletics Championships since Marvin Watts in 2001.

Anderson, who ran a personal best of 1:45.89 seconds to win the men’s 800m at the South-East Conference (SEC) outdoors track and field championships in Oxford, Mississippi, last Saturday, said he is taking small steps to achieve the qualifying standard of 1:45.20 to compete at the World Athletics Championships at Oregon in July.

“My aim is to achieve the highest level I could possibly achieve, surpassing the national record and performing at the highest level possible for Jamaica; putting 800m for Jamaican men into the spotlight and let the younger generation know that we can be dominant as well,” he said.

As a part of the process to achieve these goals, Anderson had to run a personal best, which he said was not easy.

“It has been a lot of hard work and sacrifice,” he said. “It is not just work that has been done throughout one year, but over time it’s being able to run constantly and hard reps in practice; doing sprints, long runs and stuff like that.”

However, to achieve his bigger goals, the Mississippi State University students said he is putting his trust in his coach.

“I trust in the process that my coach has for me because coach Chris Woods has done it numerous times, he has a steady routine and he knows what he is doing,” he said. “For us it is process over product, so that’s why I focus on my short-term goals and as I do that everything will fall into place.”

The 2020 NJCAA Indoor Track and Field Championships second-place finisher said God has also played a huge role in getting him to this stage and will help him to go further.

“As I go by, God always provides a pathway for me so that I can achieve whichever goal that is within my reach,” Anderson said.

He said balancing sports and academics has also been important to him.

“Going to St Jago High School has created a sturdy educational foundation for me, so school was never a problem for me (because) I always get what I have to get done and I am strictly an A student,” he said.