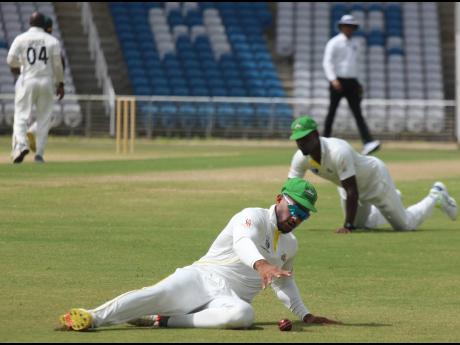 Lennox Aldred
Jamaica Scorpions batsman Brandon King dives to save runs against the Windward Islands Volcanoes on day two of their West Indies Championship match in Tarouba, Trinidad and Tobago.

Jamaica Scorpions batsman Brandon King showed just how much he loves the pitch at the Brian Lara Cricket Academy as the right-hander scored his second first-class hundred at the venue to lead the Jamaica Scorpions’ charge against the Windward Islands Volcanoes on day two of their West Indies Championship match in Tarouba yesterday.

The last time King played at the venue, he hit 133 against the Trinidad and Tobago Red Force in 2019. This time around, it was the Volcanoes bowlers who felt his blade as he posted 119 not out to help the Scorpions post a formidable score of 346 all out, replying to 137 made by the Volcanoes. The Windwards franchise, batting a second time, reached 101 for three, still trailing by 108 runs.

The day, however, belonged to King who scored his third first-class century, which included 22 fours after facing 154 balls. He got excellent support from Jamie Merchant, who scored 58, his second first-class half-century.

The pair set about a recovery mission after the Scorpions, who resumed the day on 118 for four, quickly slumped to 161 for seven. King and wicket-keeper Aldane Thomas first added 58 runs for the eighth wicket before the latter fell for 20.

Merchant then joined King, and the pair took the game away from the Volcanoes by adding 109 runs for the ninth wicket. Merchant hit six fours and three sixes in his half-century before he fell to leg spinner Keron Cottoy.

Left-arm seamer Preston McSween then claimed his fourth wicket of the innings when he bowled the last man, Nicholson Gordon, for one to leave King not out at the other end on 119.

With a lead of over 200 runs, the Scorpions bowlers went on the attack, but they had to wait until the tenth over to get the breakthrough when Derval Green had opener Kimani Melious caught by King for 17.

Green then came back and had Devon Smith caught by Jermaine Blackwood for 34 to leave the Volcanoes on 67 for two.

Just when the Volcanoes were looking to see out the day, Merchant had Alick Athanaze caught and bowled for 17 to end the day’s play at 101 for three and still trailing by 108 with seven wickets in hand.

Over at the Queen’s Park Oval, Barbados Pride reached 48 for two at stumps, replying to a mammoth 490 for seven declared by the Guyana Harpy Eagles.

Opener Kraigg Brathwaite made 17 and Shamarh Brooks two. Sheyne Mosely is not out on 17 as the Pride trail by 442 runs.

Earlier, opener Tagenarine Chanderpaul laboured to get an unbeaten 140 from 434 deliveries. Gudakesh Motie weighed in with a brilliant 110 against three wickets for Akeem Jordan.

At the Diego Martin Sports Complex, the Leeward Islands Hurricanes reached 23 without loss at stumps in their second innings, a lead of 240 after the Trinidad & Tobago Red Force were dismissed in their first innings for 140.