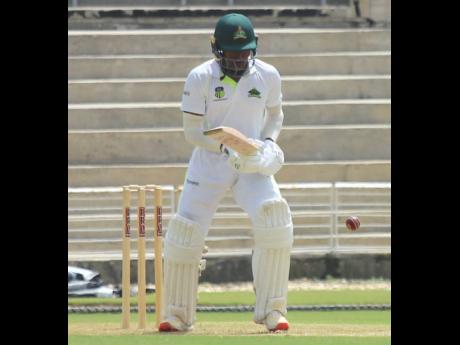 Off-spinner Jamie Merchant picked up two quick wickets just before lunch to leave the Windward Islands Volcanoes in a spot of bother at 165 for six, still trailing the Jamaica Scorpions by 44 runs in their second innings on day three of their West Indies Championship match at the Brian Lara Cricket Academy.

After resuming the day on 101 for three, the Volcanoes batters found the going tough against Merchant who sent back Ackeem Auguste for 11. He then bowled Keron Cottoy for 21 and Denis Smith in the same over for a duck.

Merchant has so far picked up four wickets for 55 as captain Kavem Hodge is still at the crease after scoring 56 with seven fours.

Over at the Queen's Park Oval, Barbados Pride, replying to the Guyana Harpy Eagles score of 490 for seven, reached 147 for four at lunch with Shai Hope not out on 62 and Raymon Reifer on 26. Keemo Paul and Veerasammy Permaul have taken two wickets each as the Pride still trail the Harpy Eagles by 343 runs.

At the Diego Martin Sports Complex, Leeward Islands Hurricanes were 188 for two in their second innings at lunch against the Trinidad & Tobago Red Force. Opener Kieron Powell is not out on 82 and with him is Devon Thomas on 54. The Hurricanes now have an overall lead of 405.