No stopping Amy The Butcher on Monday 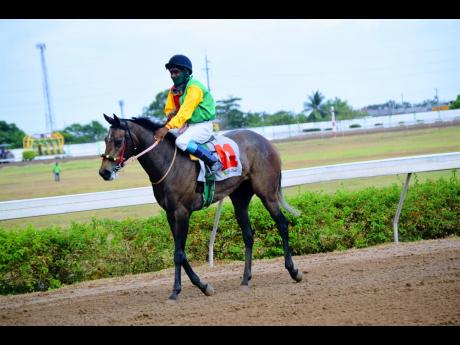 REPORTING off a four-month lay-up and unplaced in three races since finishing second to SHE’S A WONDER in last season’s Jamaica Oaks last August, AMY THE BUTCHER emerged a market-springer, even-money favourite, to dismiss non-winners-of-three at seven furlongs a month ago.

An innocent-looking-on-paper 1:15.0 for six furlongs, out the mile chute, gave no indication that AMY THE BUTCHER was “a different” animal. However, the railbirds were excited by what they were seeing at exercise, after the filly was bought privately and started taking orders from Anthony Nunes, resulting in loud whispers knocking her morning line down from 5-2.

Dick Cardenas got the seat he enjoys most, an armchair ride, tracking RUSTY, SENSATIONAL ENDING and IANZHALINKS, angling four-wide entering the straight, before changing gears for AMY THE BUTCHER to sprint clear, winning by five and a quarter lengths in 1:26.3.

Returning up in class on Monday at the exact trip and 110lb with Cardenas, AMY THE BUTCHER has nothing to fear in the big 15-horse field after posting exciting workouts aimed specifically at the Labour Day Trophy.

After galloping an easy half-mile in 50.0 on April 29, AMY THE BUTCHER was back the following Thursday with screws tightened, clocking 1:00.4 for five furlongs round. Satisfied with what he saw, Nunes eased off the throttle in subsequent gallops, an easy 1:03.0 on May 11 followed by 1:17.4, easy, for six furlongs on Tuesday.

Though facing seasoned non-winners-of-four colts and geldings such as T BRADY, TAURUS BOY, UNRULY BOSS, SANTORINI and PRESS CONFERENCE, AMY THE BUTCHER has never been better. It should also be noted that though she recently beat non-winners-of-three, AMY THE BUTCHER had conquered non-twos far earlier than most of the 14 she faces, turning back none other than BIG JULE at seven furlongs on May 22 last season.

A game filly, breaking from the one hole shouldn’t be a bother to AMY THE BUTCHER, possibly a blessing in disguise for Cardenas to ride the rail into the lane, saving ground while the speedsters, SUPER DUPER, MISTER MANDATE, BATON ROUGE, TAURUS BOY and company burn themselves out rounding each other down the backstretch.