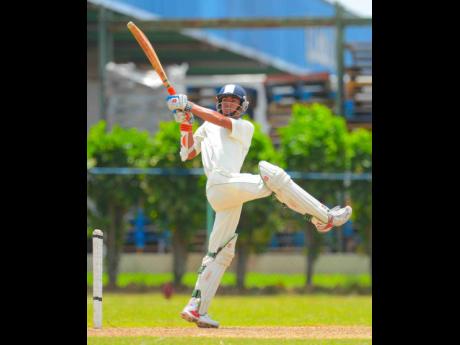 Set 68 to win from 13 overs deep in the last session on the final day at Queen’s Park Oval, Harpy Eagles got home with an over to spare thanks to the left-handed Chanderpaul’s 10-ball unbeaten 23.

More known for his tedious batting – which brought him an unbeaten 140 in the first innings – Chanderpaul dispensed with caution in favour of adventure, to get Harpy Eagles over the line.

With his side needing quick runs at the top, Chanderpaul was demoted to number seven but still arrived at the crease with the game in the balance, with Harpy Eagles struggling on 46 for five in the 10th over.

He started busily and then with 15 runs required from 11 deliveries, turned the game firmly in Guyana’s favour by plundering 18 runs from the penultimate over sent down by fast bowler Akeem Jordan who finished with four for 31.

Chanderpaul whipped the second ball through square for four, followed up with another boundary to midwicket before sprinting two to wide long on off the fourth ball.

With five runs needed, Chanderpaul unfurled an extraordinary scoop from outside off-stump to the fine leg boundary before blasting the final delivery of the over to the straight boundary, to set off celebrations for Harpy Eagles.

Captain Kraigg Brathwaite had earlier struck 111 to lift Pride to 291 in their second innings after they resume in the morning on 44 without loss.

Opener Shayne Moseley chipped in with 48, Raymon Reifer got 27 and Shane Dowrich, 24, but the defending champions failed to conjure up the batting effort required.

Brathwaite and Moseley provided Barbados with the start they needed, extending their first-wicket stand to 84 before being separated.

Moseley edged a loose drive at Smith to be caught at the wicket after facing 85 balls and counting nine fours and Shamarh Brooks followed for 13 to the same combination of Tevin Imlach and Smith.

When Roston Chase fell in the third over after lunch for 15, caught at first slip by captain Leon Johnson driving at Smith, Pride were in a spot of bother at 150 for four.

However, Brathwaite anchored two key stands, putting on 47 for the fifth wicket with Reifer and a further 50 for the seventh with Dowrich, raising hopes of a stalemate.

Dowrich and Jordan (0) fell with no addition to the score at 260 for eight and Paul then got the key wicket of Brathwaite, caught at long leg hooking at a short delivery.