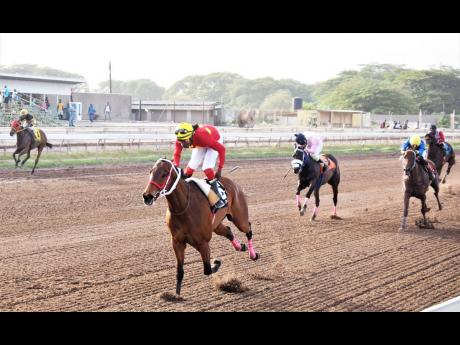 GOD OF LOVE made every post a winning one yesterday, repelling imported LURE OF LUCY down the backstretch, to notch his second overnight-allowance win in five months.

Sent straight to the lead by Robert Halledeen, GOD OF LOVE stayed on strongly up the straight to hold LABAN at bay going five furlongs round, clocking 1:00.0.

Despite carrying topweight 126lb, GOD OF LOVE was always the horse to beat, having chased down-in-class MAHOGANY into the lane in his previous race.

LURE OF LUCY tried to unsettle GOD OF LOVE down the backstretch but a confident Halledeen had a ton of horse in hand, which he unleashed coming off the home turn.

GOD OF LOVE, who spent December to March competing against open-allowance and stakes company, proved too good for the field, booking his ticket back to the class above.

Champion jockey Anthony Thomas won three races on the nine-race card, inching one ahead of injured out-of-action Dane Dawkins atop the riders’ standings.

Racing continues this afternoon, the second of three consecutive nine-race meets over the Labour Day weekend.