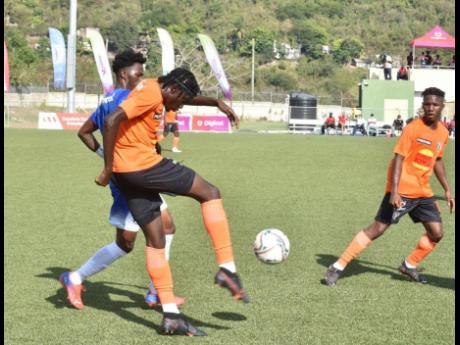 AFTER A poor run of form in April where they had two draws and two losses, Mount Pleasant Football Academy will be looking to continue their resurgence after three wins from four games in May.

There is a hiccup though, as Mount Pleasant will be missing a few key players through injuries and international duties when they take on Tivoli Gardens at Drax Hall today at 5:15 p.m.

The St Ann side will be without the Guyanese pair of Kevin Layne and Akel Clarke who are currently with their national team. While Jamoi Topey and Tarick Ximines are a part of the Reggae Boyz squad to face Catelonia in Spain on Wednesday.

Andre Fletcher is also out injured and is taking longer than expected to recover.

However, coach Nick Eaden said despite the manpower shortage, he will put out a team competitive enough to give them all three points.

“We lost a few players this week but hopefully with the squad we have, we will be able to cope.

“We will leave it as late as possible to decide on the team that will start. But we will put a competitive team out, as strong as can be. We will be as prepared as we can be, to go out and try to win the game,” he said.

Mount Pleasant are hovering in fourth spot with 31 points, four more than fifth-place Cavalier and four adrift of third-place Arnett, and though he believes it will be difficult to claim a top two spot and an automatic semi-final berth, he maintains that they are still aiming to finish as high as possible.

“From the start of the season, the objective has been the top two. That is looking beyond us now but the play-off spot is still within us, so we want to finish as high as we can.

“Like what we have done all season, we will try to go out and win the game and this will be no different,” he said.

Meanwhile, Tivoli have been steadily building momentum over the last two months. They occupy sixth place and the last play-offs spot after going unbeaten in seven matches and like their opponent have won three of their last four.

Assistant coach, Jermaine ‘Teddy’ Johnson, said they are pleased with the strides they have made recently but insists it is not time to get ahead of themselves but rather to stay grounded and keep working hard.

“We feel good about our run but we do not want to go overboard. We just want to keep our feet on the ground and continue to get the results when we play,” he said.

He said although Mount Pleasant’s form has been indifferent, they are still one of the strongest teams in the league.

“They are still one of the best teams and we have to give them respect. But we will go and play our game and try to do the right things.

“They are at their home ground and with their fans behind them, it is going to be hard. So we have to do the right things to get the three points and if you can’t get three, we try to keep the one that we already have,” he continued.

A win for Tivoli would be massive. It would lift them to fifth and just three points off Mount Pleasant in the table and Johnson said they will approach the game very positively.

“The coaches have put the belief in the team. So the first thing is to think positive. We have to go with a frame of mind to win. We will have to go there with confidence and belief in ourselves,” he said.

In the day’s other game at Drax Hall, eighth-place Humble Lion take on Vere in the Clarendon derby at 3 p.m.