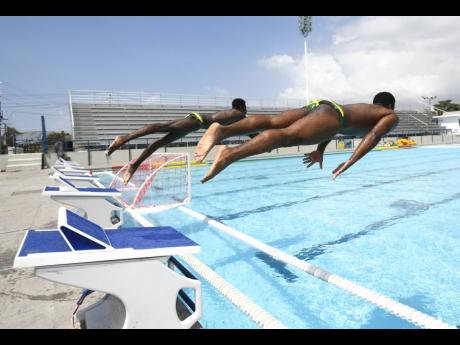 File
Boys dive into the pool at the National Aquatic Centre in Kingston.

Secretary of the Aquatic Sports Association of Jamaica (ASAJ) Shauna Jackson says the association has taken steps to reduce the cost of sending a 15-member team to the Pan American Aquatic Championships in Trinidad and Tobago, June 2-5.

Although almost half of the swimmers selected for the championships turned down the invitation because of upcomimg examinations, Jackson said they still have to operate on a tight budget and a number of adjustments were made to meet the cost of the trip.

The athletes were expected to travel at an estimated cost of more than $333,000 per swimmer, and Jackson said they have done their best to manage this cost.

They have adjusted the number of officials slated to go from the five originally ratified to three.

Also, instead of the traditional two members to a room, it will be three to a room while there will be only one weekend of team-building activities and training together.

“With four members living in Montego Bay, we opted to have one weekend of activities instead of two so travelling and accommodation costs are not too heavy because it is a difficult time.

“Even the type of rooms that we would have selected, we have adjusted. Our members will share three to a room, and this was all in discussion with the parents as we believe this is in the best interests of the athletes and the parents’ pockets.

“We are cutting costs where we can, and we are doing our very best while trying to find support and sponsorship,” Jackson said.

Meanwhile, the decision by some parents to decline the invitation to allow their children to focus on their examinations is understandable, Jackson said.

Some swimmers have examinations scheduled on the days of the championship..

Jackson praised the athletes who have taken up the invitation for their sacrifice and understanding of what is required to become successful student athletes.

“Everyone has some type of examination at this time of year. The official travel dates are June 1 and June 7. And we will be in and out.

“But you do not get to this level of swimming and selection without knowing how to balance. I am confident the kids know what is required.

“My own son is a part of the team. He knows if you want to be an athlete at this level and you want to represent your country and do well at school, you have to do what it takes, and I am sure the kids will be able to balance it with the help of their families,” she reasoned.