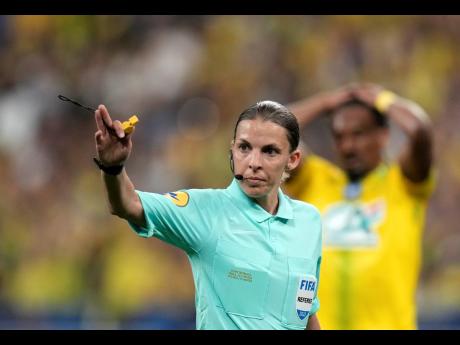 JAMAICAN REFEREE Jessica Kerr-Wilson said she is happy that female referees will be given the opportunity to showcase their talent at the FIFA Men’s World Cup in Qatar from November 21 to December 18. Last week, FIFA announced that France’s...

JAMAICAN REFEREE Jessica Kerr-Wilson said she is happy that female referees will be given the opportunity to showcase their talent at the FIFA Men’s World Cup in Qatar from November 21 to December 18.

Last week, FIFA announced that France’s Stephanie Frappart, Rwanda’s Salima Mukansanga and Japan’s Yoshimi Yamashita, who will be supported by three female assistant referees, are to be the first-ever female referees to officiate at a men’s World Cup.

“The men’s World Cup is the biggest thing in football and for females to be participating, it is showing that we are doing equal amounts of the work that men are doing,” said Kerr-Wilson.

Kerr-Wilson, who was one of the first female referees at a men’s CONCACAF Gold Cup in 2021, said gender bias might cause some challenges for the women headed to the World Cup.

“We train twice as hard as the males or even more, because it is a competitive world,” she said.

“I don’t think it will be that challenging, they just have to put their minds to whatever task is at hand and they will overcome whatever challenge that is set for them.”

She said even though they might officiate games involving major teams such as Argentina, they will be OK once they remain focused.

“When you actually go in the game and you start officiating then it will become second nature because you prepare yourself going into the game, so it is usually easier than you expect,” she said.

She said officiating as a female was even more challenging previously because of gender stereotypes.

“They would say it is a men’s game so women should not be given the opportunity to officiate,” she said.

“They think of the past and they do not look at the future, such as things like us females being in the kitchen, doing housework and doing chores. So us officiating games was a no-no because we do not know the rules of the game and a lot of things.”

However, she said nowadays women are more accepted in the sport even as officials for male competitions.

“They now accept the fact that females are living up to the expectations (and) they are way beyond par as it relates to the games, they are keeping up with the pace of the games, they are getting the calls correct (and although) maybe in a game we might have a one or two calls that are incorrect, we are all human beings (and) it is what we do after we make those calls,” she said.

“It is more accepting that females are doing even better than some of the males, so the opportunity is being given to us.”

However, she said discrimination against females in football will never end and so she gave some advice to the female referees set to officiate at the upcoming World Cup should they face any.

“My advice is (for them to) stick to the task at hand which is the game,” she said.

“Once you are making the decision correctly then nothing should stop you from doing your job, which is officiating to the best of your ability.”

She said for Jamaican females to get to a similar level of officiating, she thinks there needs to be more encouragement.

“Encouragement in the form of incentives … or even seeing the need to want to be officials because a lot of females are not interested in officiating because of the discrimination,” she said.

Kerr-Wilson is one of four Jamaican female match officials who have been shortlisted by FIFA for the 2023 FIFA Women’s World Cup in Australia and New Zealand.