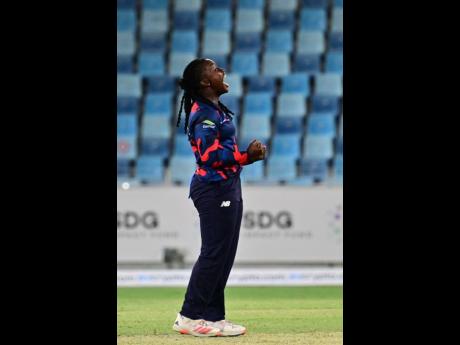 DEANDRA DOTTIN’S incisive opening spell was to no avail as her Supernovas suffered a seven-wicket defeat to Velocity in the Women’s T20 Challenge here yesterday.

With Velocity chasing 151 for victory at the Maharashtra Cricket Association Stadium, Dottin snatched two wickets with her sharp medium pace but South African stroke-maker Laura Wolvaardt struck an unbeaten 51 from 35 balls to see off the threat with 10 balls to spare.

Opener Shafali Verma also got 51 from 33 deliveries while captain Deepti Sharma chipped in with an unbeaten 24.

Dottin had earlier failed with the bat, making just six but Supernovas were propelled to 150 for five from their 20 overs by captain Harmanpreet Kaur’s polished 71 from 51 balls.

Sent in, Supernovas suffered a top-order collapse, tumbling to 18 for three in the fourth over with Dottin third out, top-edging a slog at off-spinner Deepti and falling to a catch at the wicket.

Harmanpreet engineered the revival, however, punching seven fours and three sixes in an 82-run fourth-wicket partnership with wicketkeeper Taniya Bhatia (36) before anchoring a 38-run fifth-wicket stand with South African Sune Luus (20 not out).

In reply, Supernovas struck early when fast bowler Pooja Vastrakar knocked over Natthakan Chantham (one) in the second over with six runs on the board.

Verma repaired the damage, striking nine fours and a six in a 63-run,second-wicket stand with Yastika Bhatia who made 17 before Dottin threatened to turn the game on its head.

First, the Barbadian right-armer bowled Yastika off her pads in the eighth over as the left-hander attempted to play through the onside, and then had Verma brilliantly caught at short third man by Harmanpreet.

Supernovas’ hopes of further wickets to fuel their victory bid were then spoilt by Wolvaardt, who belted seven fours and a six in a 71-run, unbroken fourth-wicket partnership with Deepti, to see Velocity over the line.