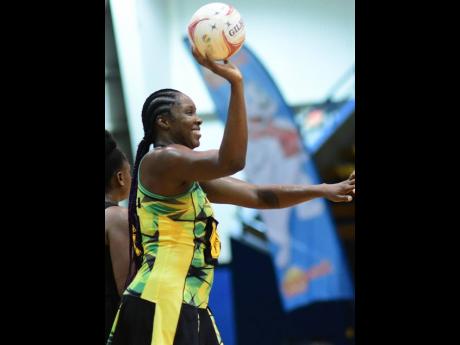 JHANIELE FOWLER and fellow Jamaican star Shimona Nelson both turned in outstanding performances but suffered contrasting fortunes, in the 11th round of the Australian Super Netball Championship.

Playing at the RAC Arena here Sunday, the 32-year-old Fowler scored 66 goals from 67 attempts as West Coast Fever defeated Giants Netball 86-77, to open up a clear lead in second spot.

They also smashed the record for the highest-ever Super Netball goals-tally, surpassing the 82 they held along with Giants and Sunshine Coast Lightning.

At the Melbourne Sports Centre, meanwhile, Nelson was a perfect 30 from 30 but her Collingwood Magpies slumped to a disappointing 53-58 defeat to Adelaide Thunderbirds, to remain one from bottom of the eight-team league.

With three rounds remaining in the preliminaries, Melbourne Vixes top the standings with 36 points with Fever four behind in second and Thunderbirds a distant third on 20.

Giants and New South Wales Swifts are also on 20 points but lie fourth and fifth, respectively, while Queensland Firebirds, Magpies and Lightning are sixth, seventh and eighth – all on 16 points.

Already the goals leader this season, Fowler once again set about her business on Sunday with efficiency as Fever were forced to battle before eking out a 23-21 first-quarter lead.

They led 46-37 at the half and were ahead by a 13-goal margin, 67-54, at the end of the third quarter. Fever were outscored 23-17 in the final stanza but their cushion was enough to withstand the late charge from the visitors.

England international Jo Harten led the losers with a perfect 37 from 37 while Sophie Dwyer supported with 10 goals from 12 attempts.

“This was a tough one where we knew we had to come out and execute the game plan well,” Fowler said.

“We did for most of the game. Still work to be done but congratulations to us for working through it.”

Nelson, meanwhile, was also the epitome of perfection but Magpies trailed 13-15 at the end of the first quarter and were down 32-24 at the half in their contest on Sunday.

The deficit widened to 46-35 at the start of the final quarter and even though they outscored the winners 18-12 down the stretch, the comeback was too little too late.

Lucy Austin scored 49 from 53 attempts for Thunderbirds, who featured the Jamaican pair of Shamera Sterling and Latanya Wilson in their defence.