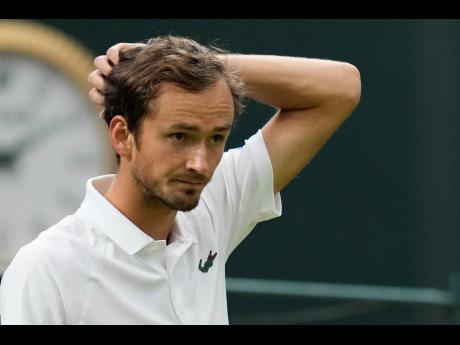 US OPEN champion Daniil Medvedev acknowledged it’s “very strange” that he could rise to Number One in the rankings as a result of not being allowed to play at Wimbledon.

The Russian, ranked second behind Novak Djokovic, began his French Open campaign with a straight-set victory on Tuesday but the All England Club’s decision to ban players from Russia and Belarus from Wimbledon because of the invasion of Ukraine was still the main talking point.

In response to the ban, the ATP and the WTA women’s tour announced they would not award ranking points to any players for results at Wimbledon.

That means all players who earned ranking points at Wimbledon in 2021 – Djokovic earned the maximum 2,000 for taking the championship – will have those erased from their record as part of the usual 52-week system that counts someone’s best 19 tournaments over that span. Djokovic is currently 680 points ahead of Medvedev but the Serb could also lose ranking points if he fails to defend his French Open title.

“Very strange,” Medvedev said of the situation, after beating Facundo Bagnis 6-2, 6-2, 6-2. I need to be honest. But yeah, as I said last time, I’d be really happy to play Wimbledon.

“But if I cannot, I mean, just going to prepare for next tournaments and ... just follow what’s happening there. There are no points, I become Number One, well great for me. If there are points, I cannot become Number One, I’m going to be gutted. It is what it is. I cannot change some decisions, both about ATP and Wimbledon.”

Medvedev called the ATP’s response “very logical” compared to Wimbledon’s explanation: “I’m not saying which decision is right, but at least so far in explaining their decisions, I found ATP just more logical.”

Seventh-seeded Andrey Rublev said the ATP’s response shows that tournaments “cannot do whatever they want.” The Russian called on tournaments and players to work together.

The 26-year-old Medvedev, playing just his second match after returning from hernia surgery, was a quarter-finalist at Roland Garros last year after four straight losses in the first round.

He’s never been a big fan of clay, but he’s warming to Paris.

“I need to be 100 per cent focused and ready for what clay has to give to me. Right now I feel ready,” said Medvedev, who lost to Rafael Nadal in this year’s Australian Open final.