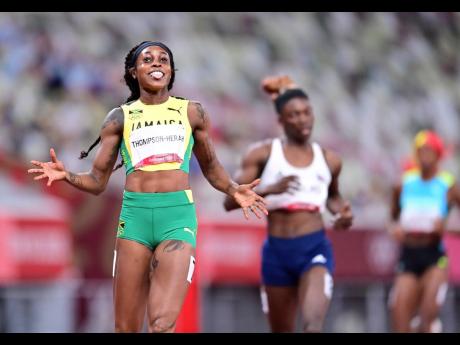 DOUBLE OLYMPIC sprint champion Elaine Thompson Herah says she is still feeling pain from an injured shoulder which forced her to pull out of last weekend’s Birmingham Diamond League meet. Thompson Herah, who was down to contest the 100m event in...

DOUBLE OLYMPIC sprint champion Elaine Thompson Herah says she is still feeling pain from an injured shoulder which forced her to pull out of last weekend’s Birmingham Diamond League meet.

Thompson Herah, who was down to contest the 100m event in Birmingham, cancelled her appearance at the meet due to a rotator cuff injury, which she picked up at the Mount SAC relays last month.

However, the 29-year-old returned to the track on Saturday to clock 10.94 seconds to win the women’s 100m final at the JAAA/SDF Jubilee Series at the National Stadium.

She told The Gleaner after the race that she was still feeling pain in the shoulder, but she was happy to compete in the event.

“Honestly, when I went to the Mount SAC Relays, I had a rotated shoulder, I never had a shoulder injury, but now it is calming down, but every now and then it acts up, so I am just here working with it,” said Thompson Herah.

“I am not a hundred per cent, I must say, but I think it was the best decision for me not to go to Birmingham and just to test here to see how I can move on from that,” Thompson Herah said.

After winning the 100m event, Thompson Herah, who will be seeking her first world title at this year’s World Championships in Eugene, Oregon, returned to win the 200m in a season’s best of 22.55.

The former Manchester High School standout stated that despite her injury setbacks, she is very focused on claiming her first world title.

“It is going to be my fourth World Championships, I am trying to attack and I am just using this season as a motivation,” she said.

“There is no pressure on myself even though last year I ran 10.54, so I am capable of doing anything once I am healthy,” Thompson Herah said.

According to Thompson Herah, the Achilles injury she has suffered from over the years is still very much there but she is pushing through.

“Honesty, I am not a hundred per cent, but I am still happy to get a 10.94 and that means that I can still continue to work on my weak areas and just use this race to carry me forward,” Thompson Herah said.

“I don’t like to talk about my Achilles, but it is not a hundred per cent, but it is because my shoulder is giving me a warm time. My first punch is giving me some discomfort and when I travel it does affect me, but today I tested and it feels much better,” she said.