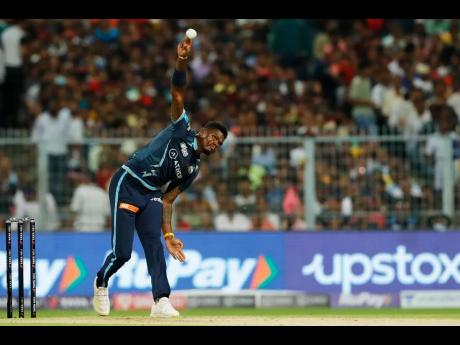 Courtesy of iplt20.com
Alzarri Joseph bowling for the Gujarat Titans in the Indian Premier League qualifier against Rajasthan Royals at Eden Gardens in Kolkata on Tuesday.

Chasing a challenging 189 at Eden Gardens, Titans swept to their target with three balls to spare with South African David Miller lashing an unbeaten 68 off 38 deliveries.

Captain Hardik Pandya chipped in with an unbeaten 40 off 27 deliveries while Shubman Gill and Matthew Wade both scored 35, in a show of force by the leading side in the league this season.

Hetmyer had earlier managed only four in Royals’ 188 for six off their 20 overs, as England’s Jos Buttler top-scored with 89 from 56 balls to miss out on his fourth hundred of the campaign while surpassing 700 runs.

He belted a dozen fours and two sixes, joining with captain Sanju Samson (47) to pull the innings around in a 68-run second-wicket stand after Yashasvi Jaiswal perished for three in the second over of the match.

Samson struck five fours and three sixes in a 26-ball knock and when he fell, Buttler put on a further 37 for the third wicket with Devdutt Padikkal (28) before dominating a 45-run fourth-wicket stand with Hetmyer.

The left-handed West Indies stroke maker never found his touch and holed out to long on in the penultimate over off the seventh ball he faced.

In reply, Wriddhiman Saha fell to the second ball of the run chase without a run on the board but Gill and Wade steadied the innings in a 72-run second-wicket partnership before Miller arrived to take charge.

Entering the contest at 85 for three in the 10th over when Wade was dismissed, Miller launched a savage attack on the Royals attack as he posted 106 in an unbroken fourth-wicket partnership with Pandya.

He struck three fours and five sixes while Pandya counted five fours, yet the run chase was not done and dusted until the last over with 16 required for victory.

But Miller promptly launched the first three deliveries for stunning sixes to complete a thrilling win for Titans.

West Indies left-arm seamer Obed McCoy also came in for a hammering, conceding one for 40 from his four overs.