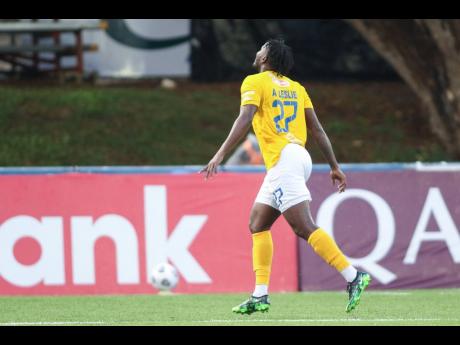 Courtesy of concacaf.com
Waterhouse’s Andre Leslie celebrates one of the three goals he scored in a Concacaf League playoff game against Puerto Rico’s Bayamon FC at the Estadio Cibao in the Dominican Republic on Wednesday.

Leslie’s goals, scored in a whirlwind second half in the 78th, 84th, and 87th minutes of play, came after Stephen Williams had opened Waterhouse’s account in the 67th against Puerto Rico’s Bayamón FC.

Waterhouose were looking at their third opportunity at a Concacaf League berth after failing to earn an automatic spot by making it to the final of the Caribbean Club Championships, and then failing again after losing a third-place play-off in that same competition.

First Waterhouse found eventual champions Violette FC out of Haiti too much to handle in their semi-final, crashing to a 3-1 defeat, though they came into the game favourites after going unbeaten in the first round.

Waterhouse had first dispatched another Haitian outfit in Arcahaie, 2-0, before earning a 0-0 draw against Vega Real.

Surely, a place in the Concacaf League still beckoned as Waterhouse were set to face Vega Real again in the third-place playoff. But again, the two teams could not be separated and the game ended in a 1-1 draw.

Then a horrendous penalty shoot-out ensued where just four of 10 spots were converted, Vega real running out 3-1 winners.

Waterhouse will know their schedule in the Concacaf League come on Wednesday, June 8, when the competition’s draw will be held in Miami.