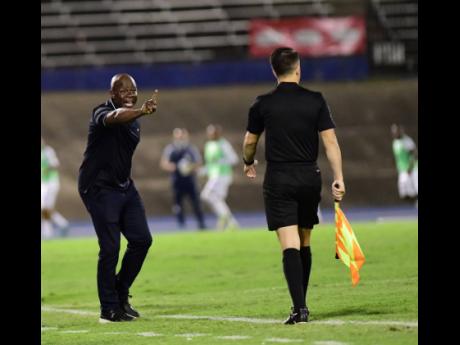 Gerard Deulofeu scored a hat-trick for the Catalonians in the fourth, 29th and 45th minutes to lead them to a comfortable victory over the Jamaicans. Marc Bartra in the 34th minute, Ferran Jutgla in the 74th and Javi Puado (89th) were the other scorers for Catalonia.

The Reggae Boyz defensive unit, including Jamoy Topey, Ramone Howell, Tarick Ximines and Ajeanie Talbot, was no match for the swift Catalonia attackers as they raced to a 4-0 lead at half-time with Deulofeu, former Barcelona player, scoring a hat-trick before the referee blew his whistle.

Talbot was substituted after the first 20 minutes of play after suffering an injury, while Ximines left the pitch even before that.

Hall told The Gleaner from Catalonia that he was very disappointed with the team’s poor defensive execution throughout the match.

“Yes, we were (poor defensively), but this is a group that was thrown together, they don’t know each other, and I am just glad that most of the players came through this match,” said Hall.

“There were very poor defensive errors. I thought that even though they were a good team, we gave them chances through our own individual errors and it taught me a lot about the players all around,” he said.

“Yes, I am disappointed with the goals that we conceded because I think that they were preventable against a very good team,” Hall stated.

According to Hall, the match provided a good platform for a number of the fringe players to showcase their talents on the international stage ahead of next month’s Nation’s League matches.

“We played against a world-class team tonight, but it is disappointing to lose by such a heavy figure,” Hall said.

“I think I learnt the most out of everybody. There were some good plus points to be taken out of the game,” he said.

“I thought that young (Tyreek) McGee came on and he passed the ball around and Joel Latibeaudiere also showed his qualities and young (Oquassa) Chong came on and did really well and so there were a few good performances even though the scoreline didn’t reflect that,” Hall said.

He pointed out that Talbot and Ximines will be assessed today by the Jamaica Football Federation’s medical team.

“I have said before the game that I wouldn’t be surprised if we get 10-love, but we only got six-love and so probably there were some information that the coach gleaned from some of the Catalonia players,” said Stewart.

“I think that if you don’t train together, then you are not going to know enough about players and teams and structure and all of those things and so there is no surprise in terms of the score for me,” he said.