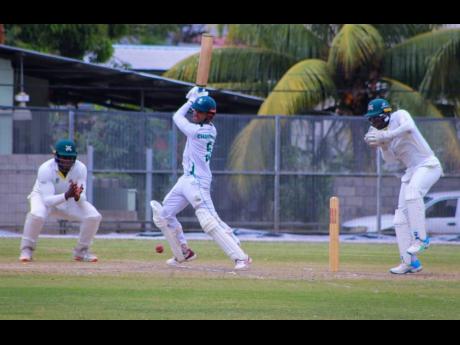 Brandon Corlette photo
Tagenarine Chanderpaul of the Guyana Harpy Eagles gathers runs during his unbeaten 96 against the Jamaica Scorpions at the Diego Martin Sports Complex on Thursday.

Opening batsman Tagenarine Chanderpaul needs just four more runs to complete a century as the Guyana Harpy Eagles closed day two of the fourth round West Indies Championship match against the Jamaica Scorpions on 213 for one, replying to the Scorpions first innings score of 393.

Chanderpaul has so far faced 228 balls and hit 16 fours for his unbeaten 96. Tevin Imlach is the other not out batsman on 38. Opener Chanderpaul Hemraj made 78, as he and Tagenarine put on 112 for the opening stand.

Fast bowler Nicholson Gordon has the only breakthrough for the Scorpions so far after having Hemraj caught behind. The Harpy Eagles trail the Scorpions by 180 runs.

Over at the Queen's Park Oval, the Leeward Islands Hurricanes, batting a second time, reached 64 for two at stumps, that is a lead of 224 runs after the Windward Islands Volcanoes were dismissed for 173 in their first innings.

Captain Rahkeem Cornwall did the brunt of the damage for the Hurricanes by bagging five for 61 while pacer Jeremiah Louis picked up three for 26. Keron Cottoy was the only Volcanoes batsman who showed any real resistance with an unbeaten 73.

Over at the Brian Lara Cricket Academy, Trinidad & Tobago Red Force were 51 for three in their second innings, still trailing the Barbados Pride by 110 runs.

The Pride were able to overhaul the Red Force first innings score of 133 and posted 294, with Raymon Reifer getting 79 and Justin Greaves scoring an even 50 and Akeem Jordan 31. Terrance Hinds picked up five for 32.