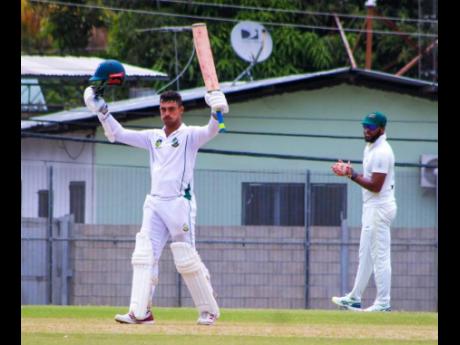 Brandon Corlette photo
Guyana Harpy Eagles opener Tagenarine Chanderpaul raises his bat after getting to his hundred against the Jamaica Scorpions at the Diego Martin Sports Complex on Friday.

All-rounder Alwyn Williams finally got a breakthrough for the Jamaica Scorpions, however, Tagenarine Chanderpaul and the Guyana Harpy Eagles reached 350 for two at tea, trailing by just 35 runs, on day three of their West Indies Championship match at the Diego Martin Sports Complex.

Resuming after lunch at 285 for one, with Chanderpaul on 128 and Imlach on 78, the Scorpion bowlers kept the ball wide and frustrated the pair who managed just seven runs after the luncheon interval.

Imlach added just one run before Williams had him caught behind with the score on 292.

Captain Leon Johnson then joined Chanderpaul and the pair put on 58 runs for the third wicket, to see the Harpy Eagles to tea without further loss. Chanderpaul is not out on 158 and Johnson is still there on 33.

Williams has so far taken one for 50 and Nicholson Gordon one for 66.

Over at the Brian Lara Cricket Academy, Barbados Pride defeated the Trinidad & Tobago Red Force by an innings and 22 runs.

The Red Force who resumed after lunch on 112 for six, still trailing by 49 runs, were dismissed for 139 with Yannic Cariah left unbeaten on 35. Roston Chase, Justin Greaves and Akeem Jordan picked up three wickets each for the Pride.

Over at the Queen's Park Oval, Windward Islands Volcanoes were 37 without loss, still needing a whopping 376 runs to beat the Leeward Islands Hurricanes.