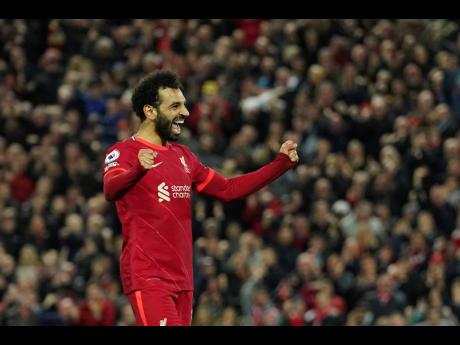 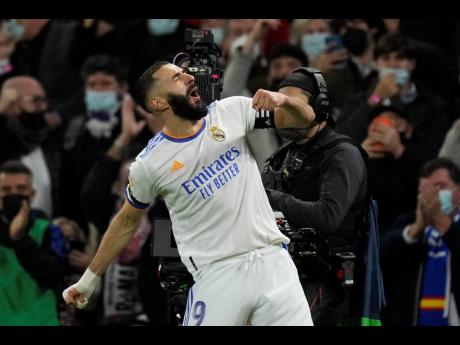 For a player who doesn’t consider himself to be a striker, Mohamed Salah is the envy of many forwards with his scoring record for Liverpool.

“I don’t play No. 9, I play on the wing,” Salah said. “It’s completely different when you play as a winger.”

And yet the Egyptian enters the Champions League (CL) final today with 31 goals in 50 games for this season and as the leading forward in English football.

An impressive goal return but one eclipsed by the true No. 9 that Real Madrid will be turning to for goals in the Stade de France. Karim Benzema’s haul stands at 44 goals, achieved in only 45 club games.

Maybe less can be more.

The showpiece climax to the European club season could well be determined by who is less fatigued after a two-year period of coronavirus-impacted schedules with few significant breaks.

Benzema, who at 34 is five years older than Salah, has only taken to the field 52 times since August for Madrid and France.

Adding on their African Cup of Nations trips in January, Salah and Senegal forward Sadio Mane are both set to play their 70th games of the season.

Liverpool have played every game possible this season and every one has had something at stake. The English Premier League went down to the wire – with Manchester City winning the title by one point on Sunday – and Liverpool won the FA Cup the previous weekend and the League Cup in February.

Madrid had the luxury of winning the Spanish league with four games to spare a month ago. Carlo Ancelotti’s hopes of a domestic cup ended in a quarter-final loss in the Copa del Rey in February.

Jürgen Klopp is still chasing a treble with Liverpool. Publicly, at least, Ancelotti isn’t talking about trying to exploit any tiredness in the Liverpool squad.

“If we’re talking about a physical perspective, we’re playing against a side which is among the best in the world in that regard,” Ancelotti said. “Add to that immense individual quality, a strong attack and good organisation. I don’t think the physical side of things will determine the result, it will be important but there are lots of other elements to assess.”

Such as Madrid’s power of recovery.

The record 13-time European champions were facing elimination in the round of 16 before two of Benzema’s 15 continental goals this season turned around the game against Paris Saint-Germain. It took an equaliser with 10 minutes to go against Chelsea to stay in the quarter-finals before ousting the defending champions in extra time. Madrid entered the 90th minute against Manchester City heading out in the semi-finals until Rodrygo was the saviour again with two goals capping another incredible comeback.

It makes Liverpool’s route through the knockout phase past Inter Milan, Benfica and Villarreal look relatively smooth to set up a reunion with Madrid after being beaten in the 2018 final.