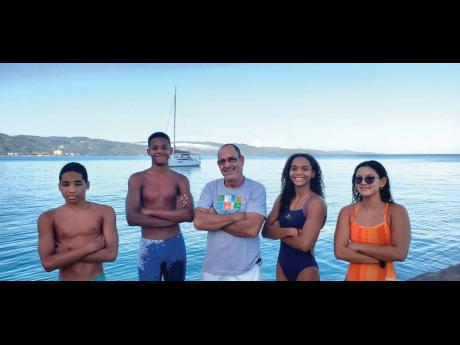 WESTERN BUREAU: Montego Bay’s national swimmers continue to bemoan the lack of a proper swimming pool in western Jamaica for them to train and hone their skills, even after several of their number have been honoured by the parish’s municipal...

Montego Bay’s national swimmers continue to bemoan the lack of a proper swimming pool in western Jamaica for them to train and hone their skills, even after several of their number have been honoured by the parish’s municipal authorities for their recent performance in the Carifta Championships.

Leanna Wainwright, a member of the swim team who participated in the Barbados-hosted games from April 16 to 19, made a fresh appeal for a proper pool to be installed so that she and other up-and-coming swimmers do not have to shuttle everywhere to go to a training venue.

“It is a challenge to not have a pool in western Jamaica, and I would love to see a pool for up-and-coming swimmers, as well as myself. But knowing that it won’t happen for me, I am hoping that in the future there will be a pool present for other swimmers that are up-and-coming,” said 16-year-old Wainwright, a student of Montego Bay High School.

“It is very challenging to move around the place and not have a single facility or a long enough pool for us to train in. When we have to go to Kingston, it is a very long pool that is there, in comparison to a 12 metres pool or the beach,” Wainwright explained.

That sentiment was shared by Cuba-born head coach Adolfo Morales, who acknowledged that the current arrangement where his swimmers do their training at Montego Bay’s local SeaGarden Beach Resort is not sufficient.

“At this moment, we swim at the SeaGarden Hotel, and the pool is 22 and a half metres long. The official pool is 25 or 50 metres long, but, in this moment, we have no other option or opportunity [for better facilities] and we have to try to do everything in this pool,” said Morales. “I must say thank you so much for the gift of this opportunity to swim in the SeaGarden pool.”

Earlier this month, the St James Municipal Corporation (StJMC) presented Wainwright and her fellow swimmers Leah Chin and Talon Longmore, along with track athlete Deandre Daley, with awards for their performance in the Carifta Games, where Jamaica won a total of 64 medals. Swimmer Benjamin Davis, the son of former Montego Bay Mayor Homer Davis, was also honoured by the municipal corporation, despite being absent from that presentation of awards.

Of the tally of 64 medals, the swimmers copped five gold, nine silver, and five bronze medals, breaking both national and Carifta records in the process.

Those achievements were accomplished despite the longstanding hurdle of the swimmers having no official pool in western Jamaica, an issue which swimming officials have been seeking to have rectified from as far back as 2013 when vandals destroyed the 25-metre pool belonging to the Blue Marlin Swim Club.

That pool, which was located at the Montego River Gardens, was valued at $2 million and held 56,000 gallons of water, with a capacity for 40 swimmers.

In spite of that ongoing setback, though, Leah Chin expressed gratitude at being able to perform as well as she did on the swim team at the Carifta Games, while noting that training has commenced for the upcoming Pan American Championships in June.