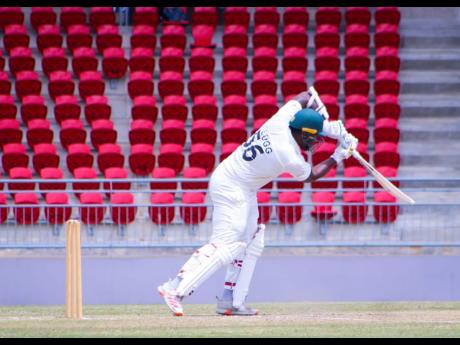 Contributed
Jamaica Scorpions opener Leroy Lugg drives on his way to an innings of 67 against the Guyana Harpy Eagles in their West Indies Championship fourth-round game at the Diego Martin Sports Complex on Saturday.

The Jamaica Scorpions have responded positively in their second innings against the Guyana Harpy Eagles, posting 111 for one at lunch on the fourth and final day of their West Indies Championship match at the Diego Martin Sports Complex.

After the Harpy Eagles had declared on their overnight score of 584 for seven, the Scorpions faced a deficit of 191 runs and began their reply sprightly posting a century stand between captain John Campbell and Leroy Lugg.

Lugg was particularly in a no-nonsense mood and hit five fours and six sixes in his knock of 67 which came off 72 balls.

The right hander brought up his maiden first-class half-century with back-to-back pull shots for four off pacer Dimitri Cameron.

He was, however outfoxed by Verasammy Permaul, who bowled him, in the 23rd over with the score on 105.

The Scorpions still trail by 80 runs, with Campbell unbeaten on 36 and Jermaine Blackwood, four.

Over at the Queens Park Oval, The Leeward Islands Hurricanes wrapped up their contest against the Windward Islands Volcanoes, winning by 228 runs.

The Volcanoes, who resumed the final day on 127 for three, still needing 286 runs to win, were dismissed for 184 with captain Rahkeem Cornwall bagging six wickets for 45 runs. Left-arm spinner Daniel Doram picked up three wickets for 13 runs.

Scores in the match, Leeward Islands Hurricanes 333 and 252 for eight declared, the Windward Islands Volcanoes 173 and 184.