Go Deh Girl gets better of God Of Love 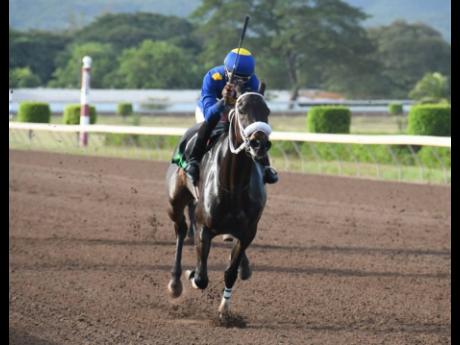 GO DEH GIRL, running at odds of 2-1, made all on the stands’ side to beat 4-5 favourite GOD OF LOVE at five furlongs straight in the Pari-mutuel Department Trophy for open-allowance runners.

The United States-bred four-year-old filly disputed the lead with DUKE and GOD OF LOVE before quickening inside the final furlong for a near five-length victory in a fast 58.2 with Tevin Foster.

GOD OF LOVE, hunting back-to-back wins after beating the lower class, overnight allowance, last Saturday, tried matching strides with GO DEH GIRL but was left standing when the filly was let off the bridle.

GO DEH GIRL sealed a two-timer for Foster, who had earlier opened the 11-race card, going all the way with 8-5 chance MAGGIE’S BOY among three-year-old maidens at six furlongs.

Foster shared riding honours with Aaron Chatrie and champion jockey Anthony Thomas, who extended his lead to four winners ahead of Dane Dawkins atop the standings.

Thomas made all with TRIPLE SEVEN in the fifth to close a two-timer for Todd and returned in the nightpan to make every yard of the running with leading trainer Jason DaCosta’s DOUBLE DIVA for the imported filly’s fourth consecutive win from five starts.

Racing continues at the weekend with the 1000 and 2000 Guineas classics set for Saturday and Sunday, respectively.