Scorpions bat out the final day to secure draw 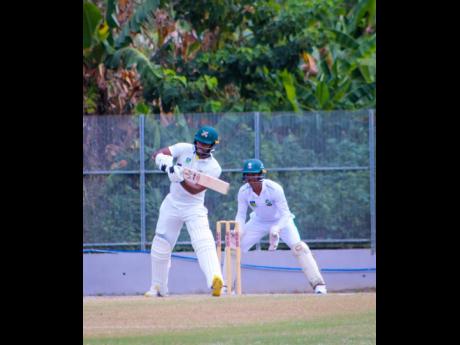 Contributed
Jamaica Scorpions captain John Campbell bats during his innings of 98 on the final day of a West Indies Championship encounter against the Guyana Harpy Eagles at the Diego Martin Sports Complex in Trinidad on Saturday.

On a day when the Jamaica Scorpions needed to bat three sessions to save the game against the Guyana Harpy Eagles, captain John Campbell led from the front with a big half-century to secure a draw in their fourth-round West Indies Championship contest at the Diego Martin Sports Complex.

Campbell fell just two runs short of what would have been a workmanlike century, as the Scorpions reached 272 for six when the game was called off late in the day.

The left-hander, along with fellow opener Leroy Lugg, began the final day’s play positively after the Harpy Eagles declared on their overnight score of 584 for seven, leaving the Scorpions a deficit of 191 runs.

The pair put on 105 for the first wicket, with Lugg blasting his way to a quickfire 67 from 72 balls before he was bowled by Veersammy Permaul. The burly right-hander slammed five fours and six sixes in getting to his maiden first-class half-century.

The score of 169 for two quickly became 175 for three when Oraine Williams, for the second time in the match, was adjudged lbw, this time to Motie for just one run to leave the Scorpions worried with still a session and a half to play.

Campbell and Paul Palmer then steadied the nerves a bit with a 32-run fourth-wicket stand, but as soon as the pair were looking ominous, Campbell played back to a delivery that kept low from Permual and was given out lbw.

The captain had faced 155 balls and hit 11 fours and a six for his 98 runs. With their tails up, the Harpy Eagles went on an all-out attack with fielders crowding the bat of Palmer and Williams.

The pair managed to dig deep and stave off most of the threat and put on 41 runs for the fifth wicket.

With the score on 248, Williams went caught behind off Permaul for 26 and then, four runs later, Palmer went caught by Leon Johnson off Keemo Paul, also for 26.

Derval Green and wicket-keeper Aldane Thomas then made sure that the Harpy Eagles didn’t get any further breakthroughs, as the Scorpions ended on 271 for six, an overall lead of 80.

The teams will now turn their attention to the fifth and final round where the Jamaica Scorpions will play the Leeward Islands Hurricanes at the Brian Lara Cricket Academy, while the Guyana Harpy Eagles will take on the Trinidad & Tobago Red Force at the Queen’s Park Oval.

Over at the Queen’s Park Oval, the Leeward Islands Hurricanes wrapped up their contest against the Windward Islands Volcanoes, winning by 228 runs.

The Volcanoes, who resumed the final day on 127 for three, still needing 286 runs to win, were dismissed for 184 with captain Rahkeem Cornwall bagging six wickets for 45 runs. Left-arm spinner Daniel Doram picked up three wickets for 13 runs.

Scores in the match, Leeward Islands Hurricanes 333 and 252 for eight declared, the Windward Islands Volcanoes 173 and 184.

While, on Friday, the Barbados Pride wrapped up their match against the Trinidad & Tobago Red Force, winning by an innings and 22 runs.