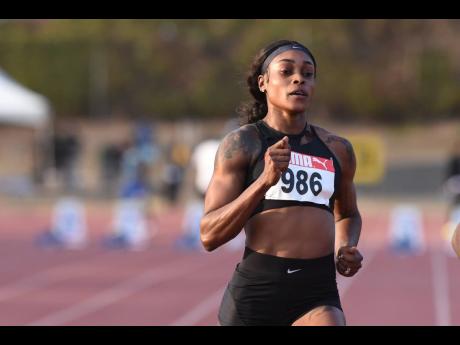 IT MAY not have been an earth-shattering time but double Olympic champion Elaine Thompson Herah repeated her brilliant display at the Diamond League Prefontaine Classic at Hayward Field in Eugene, Oregon yesterday.

The last time that Thompson Herah, Jackson, Williams and Richardson competed together was last August when Thompson Herah set the second-fastest time in history, clocking 10.54. Richardson placed ninth that year.

This time, Thompson Herah had reigning 200m champion Dina Asher-Smith of Great Britain for company through the first 50 metres, but pulled away in the latter part of the race for a comfortable win at Hayward Field, the site of the 2022 World Athletic Championships.

Thompson Herah, who has had a painful shoulder recently, said she was satisfied with the win and believes that she is building towards being in great form ahead of the National Trials in late June.

“I’m happy to cross the line healthy and with the win. It got me ready for my championship in Jamaica next month. I’m happy to see where I’m at. The result is good,” she said.

She had pulled out of the Diamond League meet in Birmingham last week, because of her shoulder, electing to compete locally at the Jubilee series on May 21 but said that, while she has experienced early challenges this year, she has the champion’s mentality to push through. Thompson Herah is on a quest for a maiden World Athletics Championships title.

“To keep the fire going is challenging, especially when you have bumps in the road. I think I have had a couple of bumps this early season and I think I am hurdling those,” Thompson Herah said after the race.

“I am a fighter and every champion has something that they are fighting or going through.”

This was Fraser-Pryce’s second 200m race of the campaign after opening her season on April 23 at the Velocity Fest in Kingston.

Fraser-Pryce had indicated in her pre-race conference on Friday that her performance would give an indication of whether or not she decides to go for the 100m-200m double at the World Championships.

“I wanted to execute technically. I still have some time to go before I get my national trial, so you always want to use every opportunity to practise your race plan,” Fraser-Pryce said after the race.

Natoya Goule’s season’s best time of 1:59.39 minutes in the women’s 800m was not enough to get into the top three, as she had to settle for fourth. The event was won by Great Britain’s Keely Hodgkinson, who won in a new world-leading time of 1:57.72.

Former World champion Danielle Williams had to settle for fifth in the women’s 100m hurdles, clocking 12.71. The event was won by Tokyo Olympic champion Jasmine Camacho-Quinn of Puerto Rico, in 12.45.