Samantha Pryce remains in US a month after broken leg 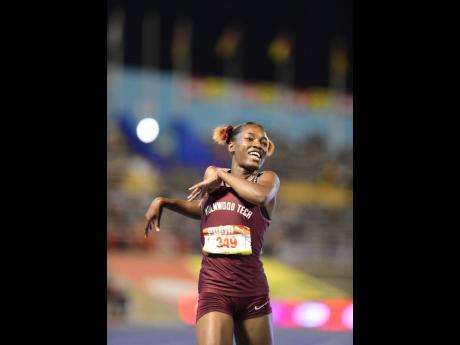 HOLMWOOD TECHNICAL High School’s outstanding distance runner Samantha Pryce is still in the United States after breaking her leg at the Penn Relays in Philadelphia, Pennsylvania, in April. Pryce, 19, broke her left leg after she was tripped on the...

HOLMWOOD TECHNICAL High School’s outstanding distance runner Samantha Pryce is still in the United States after breaking her leg at the Penn Relays in Philadelphia, Pennsylvania, in April.

Pryce, 19, broke her left leg after she was tripped on the first leg of the final of the Championships of America 4x800-metre event on April 29.

The athlete underwent surgery that night and has since been moved to a private home where she can concentrate on physiotherapy.

Holmwood head coach Dave Anderson told The Gleaner he has been in contact with Pryce and her recovery has been going well.

“Currently, Samantha is still in the United States, still recovering because she would have done the surgery the same night of the incident,” said Anderson.

“Since then, she remains in Philadelphia and going to therapy, and up to last week she would have been making a lot of progress, walking on her own but with the aid of her therapist,” he said.

“I have seen videos of her doing physiotherapy and she is feeling a lot more comfortable at this stage,” Anderson said.

Pryce had a very outstanding season this year, which saw her winning the 3000 metres and the 2000-metre steeplechase at the ISSA/GraceKennedy Boys and Girls’ Athletics Championships in April.

She also won the 3000m and finished second in the 1500m at the Carifta Games a week later.

According to Anderson, despite Pryce’s injury, a number of universities in the United States have remained committed to offering her a track and field scholarship.

“This is her final year in school and the good thing is that coaches that have been pursuing her are still very much interested in her and they are still going ahead with scholarships for her,” said Anderson.

“Hopefully, for this August and if not, she should be good for next January,” he said.

Anderson also said he expected Pryce to return from this setback a much better athlete.

“She is definitely a very good athlete and she would have served the Holmwood team well and also the country,” he said.

“I am hoping that whichever school she attends, the coaches will handle her properly and ensure that she get backs to full fitness and gets back on track to continue her track and field career.”