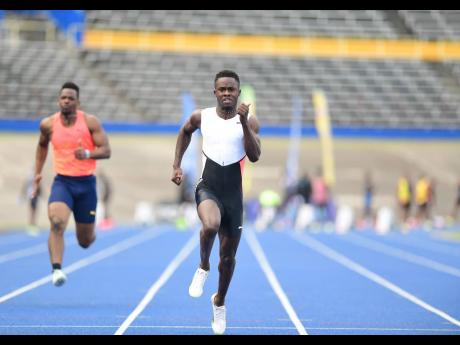 Gladstone Taylor
Ackeem Blake competing in the men’s 100m heats at Velocity Fest Eleven held at the National Stadium on Saturday, April 23, 2022. Blake won the final of the event with a personal best of 10.08 seconds.

Ackeem Blake is the third-fastest Jamaican in the men’s 100 metres this season, and his coaches at the Titans Track Club reckon he will give a good account of himself at the National Senior Championships later this month. One of them is 2005 World...

Ackeem Blake is the third-fastest Jamaican in the men’s 100 metres this season, and his coaches at the Titans Track Club reckon he will give a good account of himself at the National Senior Championships later this month. One of them is 2005 World Championships 100 runner-up Michael Frater, who says Blake is looking good.

Blake, a National Under-18 champion during his time at Merlene Ottey High School, last raced on May 12 in Puerto Rico where he clocked 10.10 seconds. He’s back on track on June 5 in Nashville, Tennessee, and again in New York on June 12.

The World Athletics Championships, set for July 15-24 in the United States city of Eugene, Oregon, is earlier than ever before, and that has influenced Blake’s training and racing schedule. “Usually after the National Trials, you’d have like a month, month and a half, to prepare for the World Championships. You’d kind of have to peak twice but this is basically once and just hold that peak going into the World Championships. So the preparation has been different,” Frater said.

“He has looked great in training thus far and it’s just for him to go out and compete,” Frater said.

Frater had high praise for the fastest Jamaican of the season, Oblique Seville, who has dashed 10.00 and 9.86 seconds in his last two races. “I thought he would have been in that type of shape at the National Trials but he has run it a little earlier than I had anticipated. But he looked the part the week before when he ran a very comfortable 10 flat in a slight headwind,” he said.

“These guys are just developing. It’s a new set of guys and they are pushing each other. There’s a competitive thing that’s going on now where these younger guys are at the forefront now, and Oblique looked great running that 9.86,” he said with obvious delight.

His confidence rests in the knowledge that Seville is coached by renowned sprint guru Glen Mills.

“Without a doubt, and he knows how to prepare athletes for championships,” he concluded.