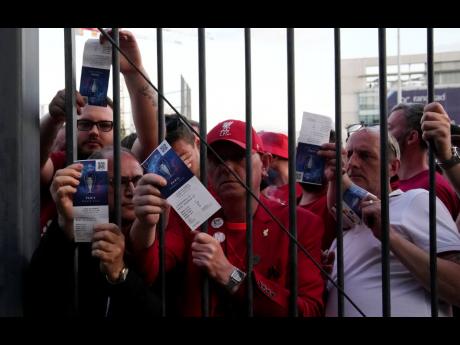 AP
Liverpool fans show tickets and wait in front of the Stade de France prior the Champions League football final between Liverpool and Real Madrid, in Saint Denis near Paris, Saturday, May 28, 2022. Police deployed tear gas on supporters waiting in long lines to get into the Stade de France for the match that was delayed by 37 minutes while security struggled to cope with the vast crowd and fans climbing over fences.

After initially blaming fans, the Union of European Football Associations (UEFA) apologised to them yesterday for the “frightening and distressing” chaos at the Champions League final after Real Madrid joined Liverpool in demanding the organiser explain what went wrong at the Stade de France.

“UEFA wishes to sincerely apologise to all spectators who had to experience or witness frightening and distressing events in the build-up to the UEFA Champions League final last Saturday,” it said in a statement. “No football fan should be put in that situation, and it must not happen again.”

Fans, including children, were tear-gassed, assaulted and harassed while trying to get into the final. UEFA initially blamed the chaos and violence on fans arriving late, then blamed holders of fake tickets. French Interior Minister Gerald Darmanin said the tear gas was justified.

UEFA added yesterday it has commissioned an independent review to identify shortcomings and responsibilities of all entities – the clubs, federations, fans, security, stadium operator – involved in the organisation of the final.

“The review, led by Dr Tiago Brandao Rodrigues from Portugal, aims at understanding what happened in the build-up to the final, and determining what lessons should be learned to ensure there is no repeat of the actions and events of that day,” UEFA said. It promised to publish the full report.

While Liverpool fans were mainly affected and the club has been gathering evidence and demanding action, Real Madrid also wanted answers from UEFA for the disorder that left its fans “abandoned and defenceless”.

“We call for answers and explanations in order to determine those responsible for leaving the fans abandoned and defenceless,” Madrid said in a statement yesterday. “Fans who, in general terms, showed exemplary conduct at all times.”

Madrid, who won the final 1-0, said the occasion “quickly turned into a series of unfortunate events which have caused a sense of outrage around the world”.

It mentioned images published by the media that showed supporters being “attacked, harassed, assaulted and robbed in violent fashion. These occurrences continued as they moved in their cars or buses, causing concern for their physical well-being. Certain fans even had to spend the night in hospital as a result of injuries.”

“Football has transmitted an image to the world which is far away from the values and goals which it should pursue,” Madrid said. “Our fans and supporters deserve a response and those responsible are to be held accountable in order for events like these to be eradicated from football and sport in general.”